Maybe five years ago, my friend, David G. told me I was a "daddy'.

Somewhere deep down, I knew this day would come. Me becoming one - not him calling me out on it.

I was relaying a story to him about me having a drink in DC on a work trip and this attractive man in a suit was chatting me up. He got zero of my cultural references and I finally asked how old he was, and he was 23.

To his credit, he looked more mature. But I wasn't interested in 23 year olds when I was 23. Not that I was searching anyone out that evening - I was just dodging a horrific thunderstorm. Honest.

As soon as the rain let up, I headed to my hotel, grabbing food along the way for an evening of work in my room.

Still, I suppose David was right. A man of a certain age, in gay terms, becomes a 'daddy'.  This is probably one reason I don't venture to gay bars. My friend Jon went to one a few weeks back and mentioned how young everyone was.

But fuck it, I've earned this age. I did not come by it easily. But it doesn't mean I want to be categorized as a father figure.

So Joe had posted something about him being a "Daddy" from this Gay Cliques Census site. They didn't tell me anything I didn't really know. 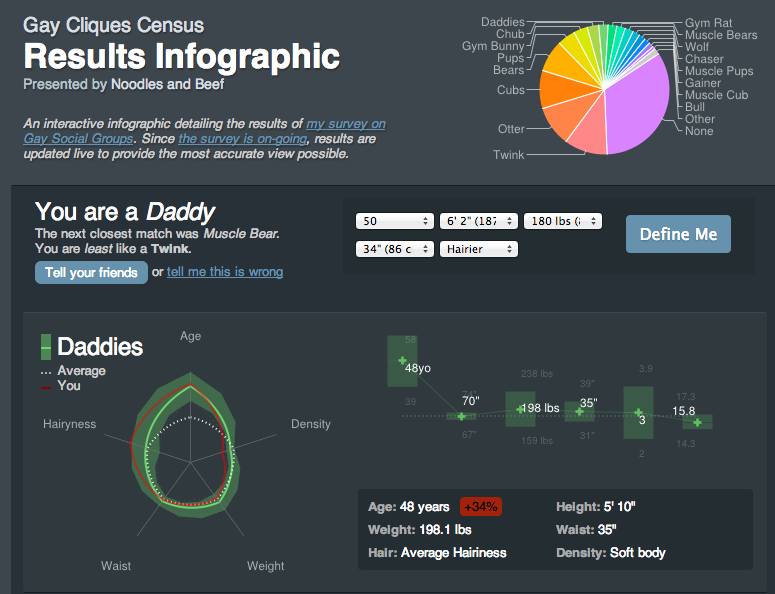 I might take offense at Density: soft body.  I've been working (fairly) hard at that. It might not be 'gym bunny' hard, but 'soft'?  FUCK YOU.

No one - and I mean, no one - is mistaking me for a muscle bear. Even Louis Braille knew better. So did the girl from Mask.   ...the blind one, not the Cher one.

I guess I should be happy I wasn't called a 'Chub', a 'Gainer' (whatever that is),  or horror of horrors, 'Average'. 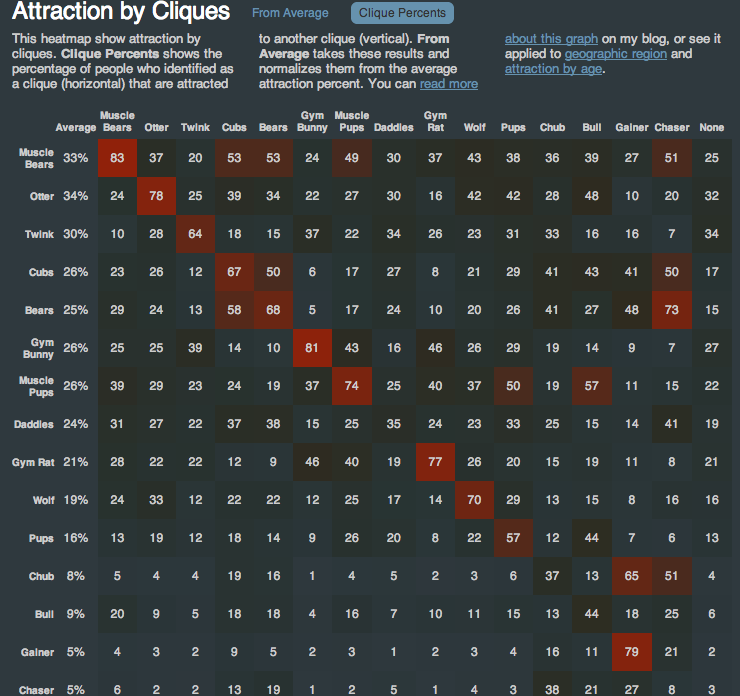 I'm not sure we even want to get into which category falls into the majority of 'top' or 'bottom'.

It seems these numbers (maybe all of them) are being derived from self-identifying, which you can do it if you back out the URL to  "/census/" part of the link.

This becomes like those thousands of buzzfeed surveys (btw, do they do anything but have stupid-assed surveys?) - you can probably manipulate it enough to get to the end result you desire.

I love how you say you were being chatted up by a "man".

I think you meant "boi".

Don't worry, young man, keep hanging out with me and you'll always still be the little cubster!

interesting statistics. A little depressing too but I am sure that is in the eye of the beholder