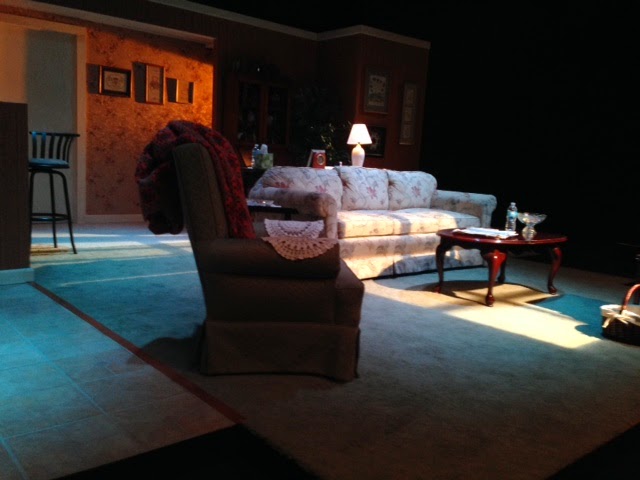 Last night we went to see a play with friends.

To be fair, they asked if we'd be interested in seeing one and I believe we answered without asking the play. I suppose we go lucky that it wasn't something that sounds disastrous, like Legally Blonde: the musical, but it might have been just as depressing on another level.

'night Mother was the play. An "up" piece about a daughter telling her mother she's planning on ending her life before morning.

In my email group, Becky said she hoped Sissy Spacek (who actually was in the film version) or Kathy Bates would be in it.  I told everyone it was Goldie Hawn...........as the daughter.

You'd have thought that response would have gotten even a lower case 'ror', but it was like crickets and tumbleweeds all at the same time.  Nothing.

I must be losing my touch.

While most of those actresses probably have a multitude of free time, chances are they're not hurting so much that they're doing a local production at the Beck Center.

I'd like to think that Cleveland has a vibrant regional theater scene, but perhaps not. We have seen only three plays at the Beck and all three have "starred" one woman. It cant' be coincidence.

Maybe she runs the place and casts herself in everything. I don't know.

I have not seen the movie, but I'm guessing Ann Bancroft and Spacek would be better. The mom was good - and to a point so was the daughter, but for the first two-thirds, I was distracted by what can only be described as her Forrest Gump vocal delivery. It was so frickin' annoying.

There was little reason (for me) to care this chick was contemplating suicide. If the playwright conveyed it in print, the actor and director didn't pull off a logical explanation, but maybe that's the point, maybe there is none.

I was taken more by the mother's lament of her being left behind at an old age and how it would be for her to die later. Honestly, to me, that is where the true emotional punch came from.

There were no song and dance numbers - not that those would have necessarily made the play better (or worse).

We went. I had a grown-up theater experience - like it or not.

Of course, we could barely get up our driveway thanks to 7-8" of new snow (!!!!!) that was wet and heavy. We probably lost some evergreens due to the weight of the snow.

Song by: Benny Mardones
Posted by Blobby at 12:04 AM

have never seen the play or the movie. I DO know I cannot stand the song in today's post title.

We just had moderate to heavy rain for over 24 hours and several periods of lightening and thunder.

Sorry you didn't like the play, altho I can't say I would willingly see a production of it again. Very dark, like Who's Afraid of Virginia Woolf? or Other Desert Cities or August: Osage County. A good production of it is all you need to see once, if you're not a glutton for emotional punishment. All of them have a good movie adaptation in common, too, except for Other Desert Cities (and I expect one will be produced eventually).

For something more uplifting that is touring currently, you might try American Idiot later in April. Unless you hate Green Day.

"Night Mother" is one of my favorite plays; it never ceases to intrigue and disturb me.
However, I would NOT combine this play and a long never-ending winter ! Unless you have plenty of marshmallows.