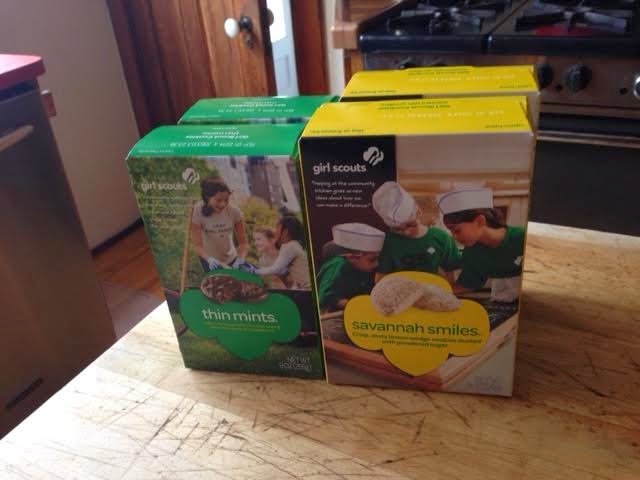 I am the model of restraint.

Four boxes. That is all I purchased.

To be fair, it is possible I only purchased two Thin Mints and two Savannah Smiles because it was all the money I had on me at the time.

To be super fair, I also thought it was the last weekend the Girl Scouts were selling their wares in front of local grocery stores.

A quick perusal will tell me that I have at least one more weekend, should the need come up and I have extra cash floating around in my wallet.

...and I happen to be near a designated grocery store - which can easily be remedied with an automobile and some determination.

Last year I purchased a case of the Savannah Smiles - and maybe 2-3 boxes of Thin Mints.

First off, in my estimation, they are the only worthy purchases.  Sure Carmel Delights Samoas are good, but you get about eight to a pack and the price is still the same as boxes with more cookies in them.

I really wanted the smiles (obviously) as they are the only version of Lemon Coolers - which no longer exists since Sunshine was bought by Keebler and the latter company ceased production. It's my one chance per year to get and consume them.

I will have you know, that the case of cookies lasted me 10 months.

How am I not the model of restraint???

A box per month? Oh yes, cases of cookies are not like cases of beer - you don't get 12.  Mind you, I probably ate an entire box at one sitting, so I still have some work to do on that 'restraint' title.

...and speaking of......  a friend of mine (yes, a friend, not a 'friend') is not as much the model of restraint as he is 'restraining order'.  The very upstanding man took a random camera shot of the Scouts in front of the store, selling cookies and was accosted by their mothers.

I get his taking the picture was capturing an image of suburban life. But I kind of get the mother's take of a grown man taking pictures of pre-teen girls. I'm sure - and I'm not testing the theory - that there are probably weirdo fetish sites out there of pre-teen girls in uniform.

Still, by all accounts, the mom's went a little overboard in their vilification.

And I think I might understand why. The Scouts you see on the above hyperlinked website are what I think of Girl Scouts being - closer to teen years. The ones who sold me my cookies?  I'm not sure they could have been in 2nd grade. (Relax! I'm not saying taking pics of 12 year olds is better than 7 year olds.)

They certainly couldn't add. They told me my total was $8 for four boxes, when it was actually $16. I amusingly tried to hold them to their original quote, after one of the mothers corrected them. The moms were not buying it.

To be honest, the girl said more than once that her mother was 122 years old.  I told the lady she looked good for her age.  She did not laugh.

I was hoping the GS would be in those green uniforms with their badge / sash and hat. I was hoping the moms would have a sense of humour and let me borrow both, so I could sit behind the table and they could take a pic of me.

It would have been a risky move, at best, after the altercation earlier in the week, but one that would have paid of for my readers.  C'mon - who wouldn't have wanted to see that?

But the girls do not seem to wear that outfit anymore. Stupid vests are now the style. And there is no way I'm fitting into a 2nd grader's vest.

They probably wouldn't have seen the humour in the whole thing anyways and called the cops on me. Not worth it.

...and then I'd end up on some registry, which means getting polarized Foster Grants and wearing a Member's Only jacket.

Gads, is it cookie season already?
I can't remember when last i bought a girl scout cookie. Perhaps not since they are no longer made with real girl scouts.

my boss bought one box of smiles into the office for all of us to share. that's as close as I got to the cookies this year.

Blech....I think they're made in a chemical plant in China anyway...

In more positive and thoughtful news (in the unlikely event anyone reading blogs would not be up to the minute...)