Police on My Back 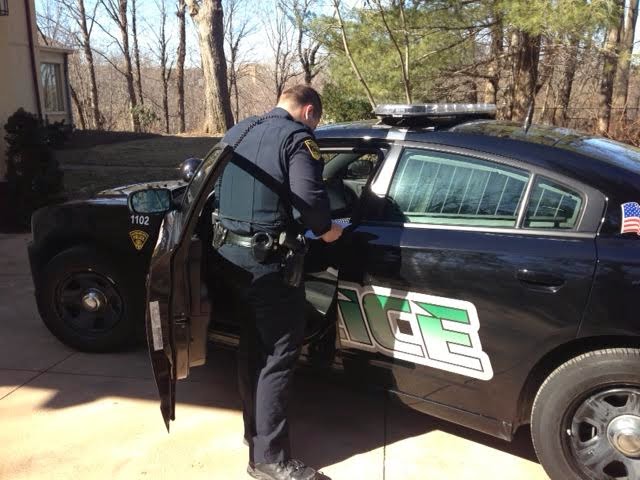 Two fully uniformed cops at my house - and nothing!  Nothing, I tellz ya.

No close up of their eyes or mine. No one bead of sweat dripping down past any of our eyes, with an extreme close-up.

Nope - it was just disappointing.

I'll back up though.

Petey and I were on our morning constitutional, barely into it actually, when Mr. Pete turned around to look at something. Naturally, I followed his lead, as he's the brains (and beauty) behind his operation.

There I saw two men walking towards the main road. Since we had not passed them, they had to have come through a neighbors back yard after we had already passed that parcel. They kept walking, never turning around. I kept watching, seeing what was what. We don't get a lot of foot traffic that isn't from our own neighbors and these weren't from our area.

Eventually, they went out of sight but not before I kind of / sort of took note of build, clothing etc. Since we got robbed 2+ years ago, I just do that. Stupid me - I never think of using my camera phone for this kind of thing.

Anyhoo, Petey and I walk about a mile and making the last leg of  heading home when we run into this: 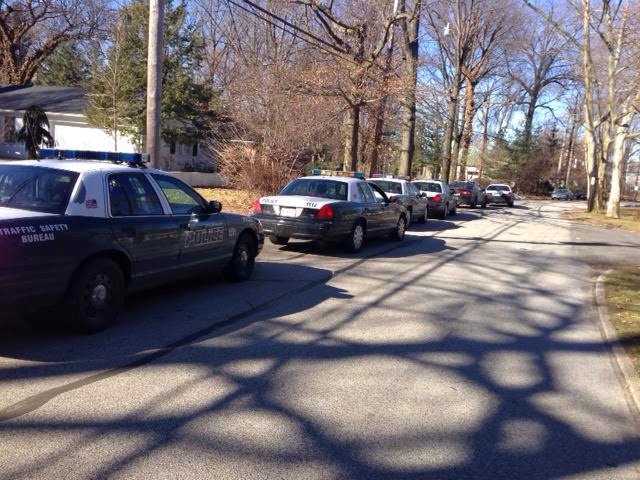 Of course, with six cop cars, I am curious. Who wouldn't be?

I can see one cop in a back yard and there is one in the front. Where the other four are - I don't know. Of course, Petey is interested because there is someone who might give him pets, a car ride....or better yet, food.

But you know cops, they're all butch and stand-off-ish. I ask if everything was all right and I was pretty much dismissed, though from their perspective it wasn't any of my business - and it wasn't. Hell, in almost nine years, I'd only see the woman who owns the house twice. I don't even know if she lives there in the winter. But I couldn't help think about those two guys I'd seen earlier. And if they exited through that neighbors yard which I suspected, the one they'd have had to come from the house where all the cops were.

I got Petey home and fed and headed back out to at least give information to the cops, in case.

I didn't have to go far, as two were near the end of our drive. One was key-uuuute. We chatted about what I saw, the time frame from which I saw it, etc. They asked if someone could come by to get a statement from me and I agreed.

About 10 minutes later there was a knock at the door and a non-key-uuuute cop was there to get my statement. Just my luck. Anyhoo, I had to write it out being as detailed as possible. I've seen enough Law & Order franchises that I think I knew what to include.

Just as I was finishing, another cop showed up - still not the cute one {damn!}. While they chatted, and Petey circled them, one of them gets radioed that they picked up three guys down the street. Then I was asked if it was possible I could identify them.

I told them I only saw two from behind. There was no third. But the cop at the end of the drive seemed to think there were 3-4 guys, maybe they just took off in different directions. I said, all I could do is possibly pick them out from behind by the clothes they were wearing - which I had already put in my detailed statement.

But sure, I could at least try. So, I got into the back of the above car and started chuckling to myself:

A. would it be weird to ask the officer to take my pic from outside the car like I was a criminal. (the            answer, to myself was, 'yes'.)
B. if neighbors saw a cop car leaving my drive with me in, would they think that was strange. (I was
hoping the answer was still 'yes' and not, 'yeah, it was only a matter of time'.

So I took the pick myself. 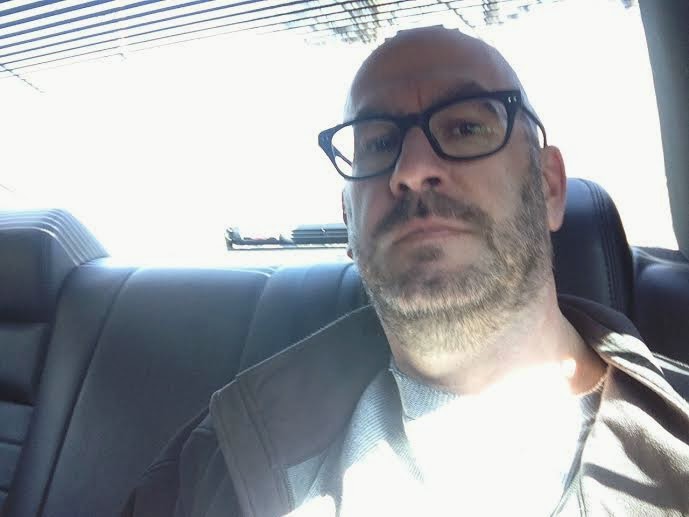 BTW - there really are no door handles or buttons to lower the windows back there.

So down the hill we go and there are another (?) five cop cars there, plus the one I'm in. Now maybe they're the same ones that were at that house, but if not, you could have robbed any bank in town because clearly all the cops were busy with me and these three guys.

Each "perp" (we, in the trade, call them "perps", dontcha know) was in a different car, I assume so they couldn't hear each other's story. They were brought out one by one and turned around for me to view, while I stayed in my cruiser.  (oh yes, we call them "cruisers" - for more than one reason.)

The first guy I recognized, because of his white sweatshirt hood and ugly grey jacket with orange sleeves.

Helpful Hint to all you would be felons out there:  Folks - if you don't want the neighborhood homo to pick you out of a line-up, don't wear such f'ugly clothes. We will notice you every. single. time.!

The other two were not as easy to say yes or no to. I was pretty sure of the second one, but not the third. I was asked to give a percentile on my 'maybe'.

Of course the one key-uuute cop was outside when they presented the second guy. Cutie Cop signaled me with a thumbs-up and thumbs-down motion. Naturally, I figured the cop was asking me if I thought he was cute or not and gave him the thumbs-up, but in retrospect, he probably meant did I think it was the guy or not.

I might have sent that perp to prison by accident, since the cop never followed up with his name or number (though he does have mine!).  {call me}

Each of the three in custody tried desperately to look into the car of which I sat, seeing if they could ID the guy who was ID'ing them.  So, lucky me!

I want Petey and I to go into the Witness Protection Program, but so far it hasn't been offered.

Still, I feel like I did my civic duty (hehehehe....I said 'duty'). What will come of it is anyone's guess. A defense attorney would easily dispel my ID since it was only from the back - and they can probably produce records that show hundreds of those ugly jackets had been sold. But I'm not sure it would ever get that far.

If nothing else, they should be able to get the guys for truancy.  I don't think they could have been old enough to be out of school.

At what point did you first think - 'this'll make a great post." Did you ever learn what had happened?

So much easy drama to be had whilst working from home....
Crime....traffic pile-ups, manor weather events, and dogs. Wow.

Maybe y'all *do* need to install a video surveillance system...