To Let You Win 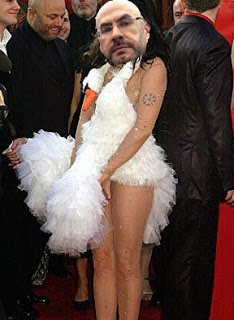 I suppose I should post this now to give anyone who wants to participate the time to play.

It was Mike who challenged me three years ago into competing in an on-line Academy Award contest, with both of us inexplicably tying for two years in a row!!! (recaps here and here.) I'd say "unheard of", but there are certain odds, I suppose that made it so.

I was also hoping with this years Oscars I could tempt Mike back into blogging for at least two entries - a pre and post Oscar entry. But since Anne Hathaway is not nominated, his dander just isn't up enough to stomp his feet and rant / rave.

(you can read his witty entries at his site - as there aren't a ton of them - entries that is, let alone witty ones.)

As it is, it looks just due to a timing issue and Mike will not be participating this year.   (sad face.) Perhaps he'll prove me wrong.

We (710 and I - not Mike and myself)  saw about half the 'best pic' selections - though we didn't make our goal of 12 movies last year. Hell, Her was out of the theaters, lickedy-split (sp?)

As for the nominees are a few sure winners out there, but most of mine are like throwing a dart at board while blindfolded.   ....and without the prospect of beating the pants off of Mike (hehehehe), where's the fun?

That's where you come in.  Engage me. Entertain me.  You've all been invited other years, and I know Mike looks scary, but he's really harmless. You can play along.

My choices are below in red. No doubt I'll leave some comments below as to my rationale.

Because Hollywood has 'black guilt' and will vote that way. Not enough so that it nominated the Butler for anything, but...     I liked Gravity, but when it came down to it, the woman was tethered to the man for life support, and the man even came back from the dead to help save her.

Despite my message above: Cuarón did amazing things with direction, most detail, and CGI stuff. I still love his take on Harry Potter and the Prisoner of Azkaban.  It's rare for a director to win without taking best film, but it happened last year, so......

The man gives me the creeps but he's won everything else, so.....

All wrapped up, though I loved Dench's performance. I always do.

Because Jordan Catalano deserves something other than that shitty 30 Seconds from Mars group.

Didn't see a one of them. Haven't even heard of three of them. But since CB goes on and on about some shitty songs on Frozen, and it is Disney.........

Because Christian Bale was hot in his own certain way.  : )   ...and space suits and t-shirts/underwear are not technically "costumes".

It's never going to a Jackass movie, or the biggest box-office bomb of 2013.

As much as I'd like Butler and Pallett to win, no one saw the movie.  It's going to Price because, other than voices it was the only sound in the movie - since you know, it's space.  But Price did a good job at making the music sound like there were sounds in space. You had to pull back to think that the music indicated (impeding) action.

Love "Happy" and if I were voting because I'm trying to win an imaginary competition, I'd select it, but it's U2 and their seemingly do-gooder persona along with a movie about a legend who died a few months ago.  Sorry Pharrell.

It was over the top - and Jay Z produced it and apparently you can't do anything without Jay Z being in-fucking-volved.

Live action short film
“Aquel No Era Yo (That Wasn’t Me)”
“Avant Que De Tout Perdre (Just before Losing Everything)”
“Helium”
“Pitääkö Mun Kaikki Hoitaa? (Do I Have to Take Care of Everything?)”
“The Voorman Problem”

Just because I want to hear a presenter, someone like Cameron Diaz,  fuck up this pronunciation .

I don't know why - I'm just guessing. All the movie had was sound - almost no dialogue.

Because it's a space movie without being a sci-fi space movie. Yes, the distance between space stations is unrealistic, but it's about the visuals of the space debris hitting the International Space Station. Period.

Because I saw it?


That's it. That's all I got. Good luck to all - if you wish to participate. No prizes other than bragging rights. Sorry.

BTW - I totally stole the title image from Mr. Mike, that he totally doctored last year!  I was actually going to make a new one but ran out of time - and possibly interest.

Djörk!
I do mean this with affection and respect. LMAO

OK, OK…enough with the pressure. I am here to reclaim my rightful Oscar crown. I am taking the lazy man's approach, just entering my (sure-to-be-correct) predictions here as a comment, instead of firing-up my own blog. But hey -- baby steps, right?

One horrible realization: I'm am going to Orlando this coming week on business…and because the weather-weenies are kicking and screaming about yet another snowstorm coming our way, I changed my Monday afternoon flight from Boston to a late Sunday night flight. Only later did i realize that this means, because of a quick layover in Atlanta, that I'll miss the ENTIRE Oscar broadcast for the first time in history. BOO HISS.

I'll rely on you, Blobby, to keep a tally of our contest (honesty counts). Here goes nothing:

Documentary feature
The Act of Killing

Animated short film
Get a horse

PS: SOOO sorry you didn't select "12 Years a Slave" as best adapted screenplay. Could be your downfall. But I'm going to assume you fall down WAAY before they announce that prize.