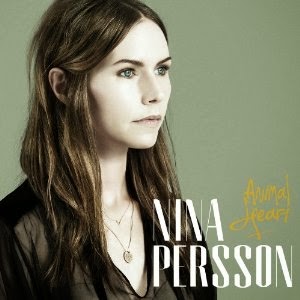 While I can't say I was a huge fan of the Cardigans' biggest U.S. hit,  1996's "Lovefool", once they released the disk, Gran Turismo, I was hooked on them. That disk and all of the following ones were great. Unfortunately, Super Extra Gravity was their last release - eight years ago.

But lead singer, Nina Persson, has her first solo disk out, Animal Heart. I accidentally stumbled upon it the evening before it was released - I never saw a word about her doing this.

Persson has played and released music with another band, A Camp, and they had two or three decent songs, but nothing as stellar as the Cardigans.

The songs have a similar structure as her "full-time" band - and you can see what she brings to the songwriting process for the band, but it is that old adage, you don't know what you've got till it's gone.

I'm always amazed that many think the lead singer is the band, but that "fact" is proven wrong time after time: Brandon Flowers (the Killers) solo disk bombed.  Most Debbie Harry solo disks were not nearly as good as Blondie. Most of Stevie Nicks' solo work pales in comparison to how her bandmates helped compliment on her songs.

So the Cardigans - the rest of them - truly bring somethings to the table that are positive. Persson even did a better solo song with "Black Winged Bird" back in 2006.

Don't get me wrong: the songs on Animal Heart are fine, but I don't know I'd call many as stand-outs.

Persson has always been good about not following standard "rules" of modulation, and those have usually worked in her favour - and do so here as well ("Burning Bridges for Fuel", "Clip Your Wings")

"Clip Your Wings" has a George Harrison guitar vibe to it, though it's much more buried than Harrison would have done.

I like the title track, though it uses an '80s keyboard technique that has been done....a lot, but overall the song is probably the closest to a Cardigan's tune - not that her work should sound like that band. Quite the opposite if you're doing something on your own.

I do love "Dreaming of Houses" and "Food for the Beast".

I want to be excited about others like "Forgot to Tell You", "Jungle and "The Grand Destruction Game" - but it's hard to when Persson doesn't seem that engaged by them herself.

Like I said - the songs and delivery are fine, but I've come to expect more from Persson - be it her solo stuff, A Camp or the Cardigans.

...yea, I'd try the sesame oil, other than that it looks yummy!