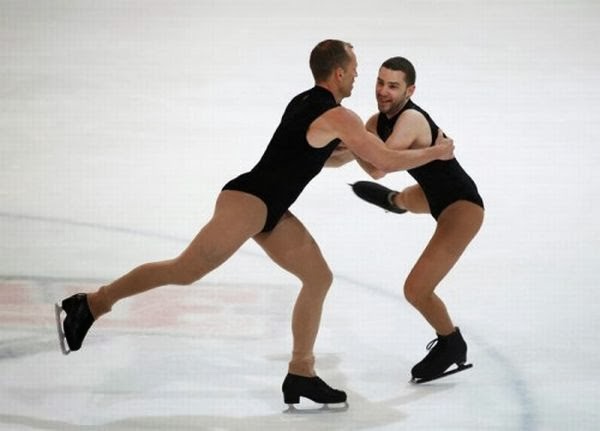 So the Games are upon us.

Yes, some preliminary events happened yesterday, but opening ceremonies are tonight (or much earlier today, if you're not going by NBC's schedule).

These are possibly the most controversial games in history - at least before they even begin. It can be argued that the Munich games of '72 or Berlin of '36 were more controversial - of course that is knowing what we know after the fact.

The 2014 Sochi games have been fraught with controversy. ...and I'm not talking the tainted water, the unflushable toilets, the unfinished hotel rooms or the killing of all the stray dogs in the area.

Nope - they are those pesky human rights issue(s) that keep popping up to plague Vladimir Putin & Co., LLC

Based on my sexual orientation, the Homosexual Board of Directors have strongly warned me against watching any of the Olympic coverage or buying / using anything from their corporate sponsors. They haven't actually mentioned kicking me out of the club should this happen, just the strong possibility of being shunned and publicly humiliated.

The HBoD and their membership are big on shunning and finger-pointing. It's their cardio. They're Mean Girls.

That said, overall, I don't care that much about the games - any of them, Summer or Winter.

Yeah - sometimes the opening ceremonies are fun to watch to see what crazy crap they throw against a wall. And I'm gay enough - and secure enough in that gaydom - to watch ice skating or ice dancing.

I mean, sure, I get creeped out by a Johnny Weir, but who the fuck doesn't?

Mind you, most of the straight USofA has little knowledge of the abuse, imprisonment and death that haunts anyone gay or supporting gay culture in Russia. The issues are prevalent to those who read blogs like this because, well....you read blogs like this. I would still argue it's not an issue that is well-known as globally as it should.

But for alllllll the fucking posturing, on how Russia treats gays and how they might treat gay athletes and athletic supporters, we, as a country, have no leg to stand on.

The Onion is becoming more and more like the Daily Show and the Colbert Report. Sure they make fake stories and approach them in a humourous way, but now and again, the Onion shines a light on true issues and just turns up the funny a notch.

They absolutely slay it with the 2014 Games and how Russia is in close partnership with the U.S. on gays and athletics.

Yes the video is in "russian" but there are subtitles. Funny subtitles that might not be real, but the message is.

Wow! You're spot on regarding "The Onion." Once in a while, they come out with something like this, biting humor wrapped around a poignant message.