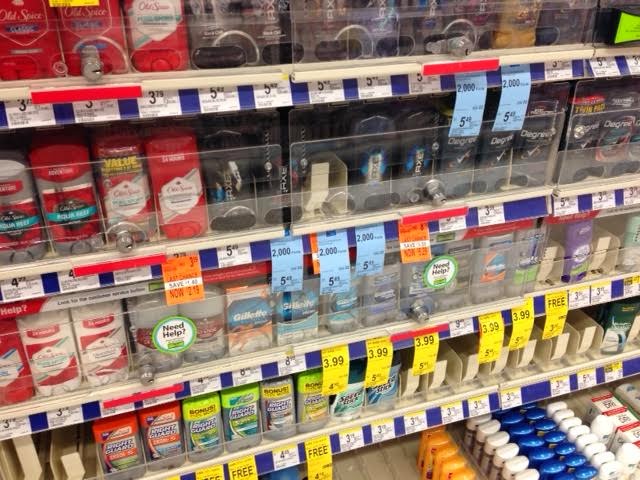 Decades (ugh) ago on a David Letterman Holiday Film Festival, Bette Midler did her one woman film (ok, there was an accompanist on the piano), Angst on a Shoestring, where she plays a malcontent, sitting in a bar lamenting and complaining about any number of issues.

In part of it she says:

"The deodorant section in any drug store in the United States is bigger than the biggest meat department in all of the USSR. Tell me - do we as a nation smell that bad?!?!"

Going to our local Walgreens the other day, I flashed upon that....and smiled to myself.

I was doing a favour for 710, going to pick him up some new anti-sweat / smell sticks (that don't contain meds for Low T). I mean, you know I'm not going to the at area of the store for myself.

For you new(er) readers, I'm not a fan or either antiperspirant or deodorant. I sweat - well, now I do (there was a time I rarely did) - but I don't really smell.  And even if I did (which I totally don't!), I shower shortly after working out.  Problem solved!!!!!

I don't know how long I've had the same roll-on. It probably doesn't work anymore - it's just for show when 710 gives me a hard time about it.  Problem solved again!

So - I have this question for you all:  WHEN did they start putting deodorant behind lock and key?

Or better yet - when did they start putting some deodorant behind lock and key? I ask this last question because a few - mostly on the bottom shelf - were free and clear to anyone.

Is this now like baby formula and sudafed?  Can I cut coke or make meth out of this stuff?  And if so how (may as well go for broke if the NSA and DEA are tracking this). And what's the ROI?

Oddly, none of the locked or unlocked ones were the top two choices I was asked to retrieve. They weren't even carried, and while I love the man, I lazier than shit, so I made an executive decision to get him something new.

The only unscented one unlocked (or locked, for that matter) was Tom's from Maine.

We'd been to Maine a number of times, so it seemed like the logical choice. And better yet, I didn't have to call and / or wait for a clerk to come unlock the cabinet.

Because if there is one thing that I'm better at than being lazy, it is being intolerant for shit like that.

I'm not sure 710 was down with my selection, but that will teach him not to send me out for stuff I clearly know nothing about. Only trouble can come out of an errand like that.

And while it has nothing to do with shopping, since I mentioned the Letterman / Midler piece, I looked up on YouTube and sure enough they have it.  It's a shitty copy, but it's also almost 30 years old. Fuck.

May as well throw it up here for you to view if you choose.  (I remember it being funnier - but I was almost 30 years younger too.)

WTeverlovinF? this is a new one on me. ours are not locked up. I can't imagine anyone selling deodorant on the black market.

there are so many to choose from these days

This says a lot about where you live, or more accurately, about where you shop. These personal hygiene products are part of the high shoplifting and price point category. Sometimes the matrix is store specific but other times it's just everywhere - like razor blades. Have you noticed that they also have clips on hanging items now too?

What I hate more about these theft deterrent devices is that they keep me for reading about the product.

I'm thinking if someone needs deodorant bad enough they are going to steal it, they should be allowed to have it. Consider it a public service and write it off.