Send Her My Love 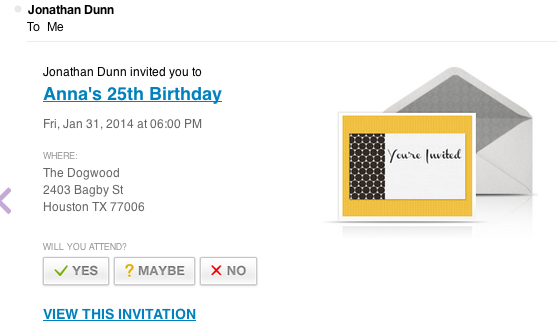 I am so over Yahoo.

'tis sad, I still have a Yahoo account which has acted as my primary personal email address since the mid-90s. Oh sure, I have others - one for professional correspondence, and because I'm a schmuck, I wasn't about to let anyone get my name in Outlook before me, so I snagged that too.

Not that I've ever used the Outlook account, but that's not the point now, is it?

I did not snag my preferred-name gmail account when I had the chance, so I got a lesser version of that - and it's been a problem. But so had my Yahoo account email.

First off - Marissa Mayer & Co have really done nothing to improve the mail system. They tried to mimic certain gmail aspects, but have failed miserably. Also, often - several times per day - things just clock trying to get into an email, let alone to craft a response or send. I'm done.

Also, I've mentioned, way in the past, of some of my email accounts getting a stream of messages meant for another guy. No, I have no idea who said "guy" is. Or guys.

It's possibly two different ones.  Or one guy has moved between Texas and Connecticut.

The best I can come up with is his name is Richard.  The email mistake might be explainable if my email address were just my first initial and last name, but it's not. It's my full first name - which, by the way, is not Richard.

I've had water bills forwarded to me. I've had church bbq invites sent my way. I've seen his notification of his rental property being flooded. I have gotten high school reunion announcements. I have seen major planning for a bachelor party for a cabin in the Rockies.

There is maintenance to be had on his Mercedes (the only thing in common we share besides a Y chromosome). There are school functions for his kids that need tended to. And if I'm getting this right, another kid on the way - if the OB/GYN emails are any indication.

Years ago, "I" even had an ex-girlfriend try to get back together with "me". I think that's the one I wrote about here years ago - as clearly they were so close she didn't even have his correct fucking email address.

That last one was my first breaking point. "Richard" might have emailed her back saying "he" wasn't interested in her anymore, as "I" was now into guys.  ...but if there were any brothers like her at home....

"Richard" never got another email from her again.....unless she got his new address.

It should be noted that I have tried doing the noble thing and emailing the school, the car dealer, the bank, the water company, the rental manager, the OB - all for nothing.  The car dealer was the only one to respond, said they'd fix the problem and then promptly restarted their chain of shit for service.

Oh, I was going to ignore it. Honest.  But then two or three more emails for him showed up, about lord knows what, just tipped me over the edge and I replied to the e-vite.

I responded that I would not be attending with the added comment that may have gone something like: "fuck no, I would NEVER attend. I've always hated that bitch!"

Once again, no one ever responded.  What does a boy have to do to garner some (any) kind of response from people?  I'd at least expect a "fuck off" - but no. Nothing.

Anyhoo - I've secured a new, better gmail address. I just have to import my contacts over and start transitioning things as needed.  g-d, I hope it goes smoothly.   ....and then the slow dumping of Yahoo. For good.

Email ThisBlogThis!Share to TwitterShare to FacebookShare to Pinterest
Labels: Email

I too have become disillusioned with yahoo. their headlines are about nothing but white trash "celebrities", drunken teens, the love/hate the president talking points, etc.

and don't even get me started on their e-mail "redesign"; it sucks ass.

now if I could figure out how to move my contact list/files over to g-mail...

Hilarious....I have had the same yahoo address since email was invented. Please email all Texas Birthday evites to geoffredo@yahoo.com I hated the bitch too. Cheers.

I hope it's just a glitch but it did make me think that maybe there was the possibility of impersonation or identity theft.