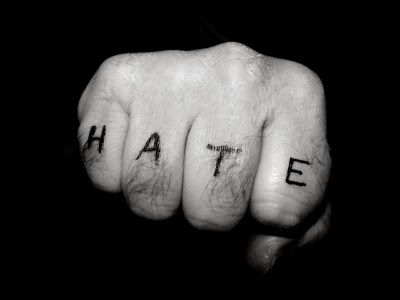 So, I was chatting with my friend Geoffrey the other day.

Yes, he's gay. His name is not Jeff (probably straight) or Jeffrey (could go either way). With "Geoffrey" you really have no choice: Gay!

Anyway, he innocently asked me when Skeletor (aka Jan Brewer) would be signing or vetoing the AZ Hate Bill*.  After my initial answer of, she had until this Friday (I think 5 business days?), my / our conversation kind of spiraled downwards. I started getting my panties in a wad.

I confessed something to him that I had been thinking but had not said out loud:

I hope Brewer signs and approves the bill.

There. I said it.

Honestly, I don't think Brewer will sign it, but honestly, I think she wants to but is in quite a pickle with all the coverage this has gotten and the businesses that are seemingly putting up a stink.

...and that is the problem.

If she vetoes it and it seemingly all goes away. Except that it doesn't.

The hate is there but it is now masked. It was always there, it was always slightly masked, but fuck, if it doesn't go through, those lawmakers who wanted it can not only say: "well, she was weak.....and now that I'm running for Governor.....this is what I'd do...."

But fuck it Arizona. Own up to your hate. Because that is what it is: hate.  You are racist and homophobic and have shown it time and time again over the last few years.   ...and yes, I'm generalizing a bit, but not when it comes to state politics.

Two (or is it now three?) state senators who voted for the bill are now asking for Brewer to veto. One even having the nerve to say he has gay friends and wouldn't want them hurt, you know, but he put "yes" in the vote column.  So we have three hypocrites trying to save their skin.

And McCain wants it vetoed.  Like anyone gives a fuck what that man wants. I was hoping the Hanoi Hilton would still have his room ready.

Don't get me started on what Mittens wants. Srsly, if even he wants it vetoed, we should rethink whether we, the gays, want the same thing.

Anderson Cooper, who is in my opinion a so-so journalist (but a fairly decent human being), really kind of stepped up to the plate with an interview with Al Melvin who co-sponsored (or wrote?) the bill in question.

Cooper doesn't let up - which I love. He succinctly gets his points across, though Melvin is either ignoring him or mentally deficient enough to understand the points being made. I kind of felt sorry for him being so ignorant of the facts - not even the hypotheticals - that he'll probably be a shoe-in for the governorship in the next election.


Of course I laughed and laughed (inside, where it counts) when Melvin has the audacity to say that there is no discrimination in Arizona. None.

Melvin says he knows no one would discriminate against anyone who is divorced or an unwed mother - but does anyone have his voting record, especially on sex education in school, planned parenthood, WIC, food stamps, Medicaid, etc?

He might want to look past his white, gated community and ask some of the locals who are not members of his church or on his staff what they think of that.

But of course, if Melvin is right and there is no discrimination in the state, why draft the law at all?

The one thing Cooper does fail to call him out for, and it's not until further into the interview, is Melvin calling it protecting religious freedom.

Cooper for the most part takes the broader road giving examples of anything that isn't gay-related, when Melvin finally does trip up (?) and say (at the 7:15 mark) that Arizona and the country are under attack - and......wait for it.........by advocates of same sex marriage.

While Cooper notes that there are no laws on the books about not allowing discrimination of gays, nor any pending change in the anti-same sex laws in Arizona, why so much effort - and why now.  But he doesn't take it that step further and nail Melvin for saying it's not about religious freedom, it's about singling out a certain population that can be discriminated against.  Period.

But you know - Arizona (and possibly Georgia) will have to own up to their own hate. Their own non-Jesus-like behaviour, which they flaunt when it fucking suits them.  So put it into law - go ahead. You won't see a dime of my money. I'd even drive around the state if need be. Hopefully the businesses claiming the bill should be vetoed will act (i.e. move) if the bill is signed.

If they don't, we have another issue on our hands: regardless of party, politicians cater to big business. If businesses are weak and only feign indignation but do nothing, politicians will have an easier time passing these laws in other states.

And a sad, simple fact is that if business pressures Brewer to veto, then it becomes about money - but the hate of the state still remains. It's just that money trumps hate.....for the time being, anyways.

The reality is - if Brewer vetoes, she's only lying....to herself, to her state and to all who watch her. She is the representative of the state and we already know she's a shrew.  ...and I'm being nice.

But if you want to be hateful, then go for it. At least we know for sure what we're dealing with - but don't put it under the guise of religion since clearly you know nothing about love, tolerance and forgiveness.

that melvin guy looks like he sucks lemons...or dicks on the side.

I love what Joe Jervis wrote on his Joe.My.God blog: Arizona, it's a dry hate.

I have a brother named Geoffrey. Not gay. At least not that I know of.

Skeletor Brewer will veto but AZ can keep it's dry hate and I will still spend my money in Palm Springs where the martinis are dry and <3 often gay.

I was sorting hoping it was signed too, to 'get all the poisons out of the mud' as it were.
I hope this sends a positive note though to others not to go doing this in their own states
Alas, AZ will find something new/more outrageous to try.

Az still doesn't recognize 'gays' as a protected class as a state, so they are really free to discriminate as if the law had passed anyway?