Walking on the Moon 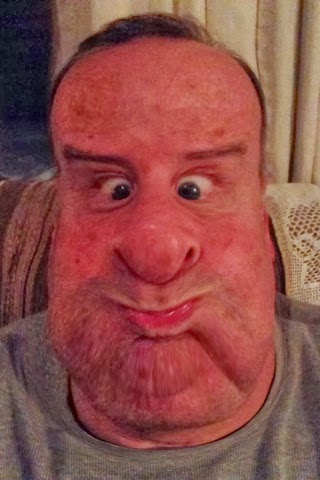 The holidays can be tough on folks. Sure there's the family dynamics, and the juggling of friends & parties. Add travel and weather in there and it is just stress upon stress.

One should not forget the amounts of food that is consumed. The yummy, not very good for you entrees, plus all those sweets. Those luscious luscious sweets.

It can just pack on the pounds. And not in a carry-on, but more like in a steamer trunk.

Naturally, I'm not talking about me!!!  No no no!! I'm still the slim trim guy you've come to know and love. The lbs just fall off me by opening the ice cream container or peeling back the paper from a chocolate fudge cupcake.

Anyways, I digress. Or do I?

A friend of mine was lamenting on the holidays and the damage done. I let him prattle on, never once mentioning that he never truly replied to my post-holiday email to see how his holiday was, how he and his family were doing - and let it be known I never inquired about his weight. But since he brought it up - how could I not run with it???

Well....it's not like he was going to chase me. Or could.

Ooops. There I go again. I can't help myself.

Naturally, I asked him to send me a picture of him on the scale. Unfathomably, he did. That silly silly boy. I MIGHT have gone too far to ask, after seeing the number, if the image was taken on the moon.

Sometimes I really don't know the line from funny to cruel, though I'm afraid I might have crossed it, like Dennis Rodman into North Korea.....and I'm afraid I hurt feelings.

Personally, I don't think he is overweight at all. He's a tall gentleman. I have no doubt he thinks he put on a few, but it probably isn't as bad as he thinks. The earth hasn't been knocked off its axis - as far as I know. I haven't heard the Ministry of Magic put out any memory charms on Harry Potter's Aunt Marge.

Though my title image does look like a cross between Harry's Aunt Marge and any number of Wallace & Gromit characters.

Honestly, I don't believe he's mad at me, just play-acting. I hope that's all it is. We'll see after he reads this. I mean - I'm assuming he's still coming back here - it's an awesome blog.

I've got to agree, this is an awesome blog.

I figure all is fair game if someone sends you a picture of the digits on the scales as they stand on it...