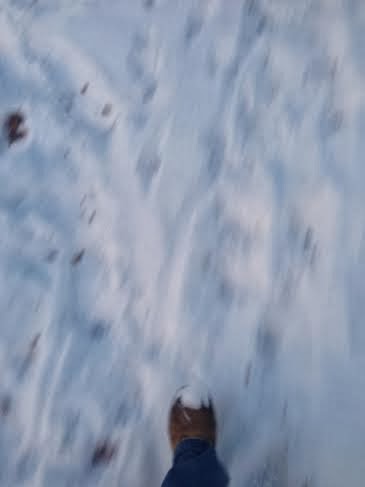 I'd like to say I have something, but nope.

This Polar Vortex thing, which everyone is fucking tired of talking about - myself included, has kind of thwarted most any activity to yak on about.

I actually ventured out to the gym two days ago - and yikes. That shiny shirt that 710 got me kept me somewhat warm, but any exposed skin to the face and such was just painful.

Ruckiry (not Jon's boss), the thaw has begun.

Yesterday we had temps nearing 20. Sure, it still felt like single digits, but that's still 30-40 degrees warmer than the two days prior.

And if the meteorologists are even somewhat correct, it will be mid-40s by the weekend. I suppose this will be the "January thaw" we have once a year, though usually we don't get it still in the first full week of the month.

Beggars can't be choosers, I suppose.

But yesterday was the first day in two or three that Petey got to actually go on a walk.  He was so excited when he saw the harness and leash. The boy was good about just going out in the freezing cold and coming back in, but he still wanted walks. He just couldn't quite put 2 & 2 together to figure out why he couldn't go out in -34 weather for extended periods of time.

Well the biggest reason was me. I wasn't doing it, but he really would have suffered too....but I wasn't gonna freeze.

Alas, that is behind us. For now.


Song by: the Cranberries
Posted by Blobby at 12:04 AM