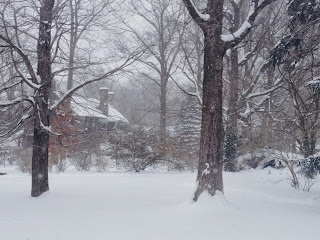 There's nothing going on. How could there be? Mother Nature has seen to that.

According to CNN, 100MM people are affected by this current "blizzard".  Lord knows we are.

But it's the drifting that makes it seem like we've had more. The winds yesterday were 30-40 mph - making the wind chill about -8F.

I'm not traveling for another two weeks, so I didn't have to deal with the airport, which is good since almost every flight was delayed or cancelled leaving CLE. To be fair, they might have been able to take off, had there been flight crews, or planes coming in from other locations, but heading east no airport was open, so........

Ruckiry (not Jon's boss), I wasn't really driving anywhere either, so didn't experience white-out conditions. I did drive to the grocery store for a few items (not even staples, as we always have those), because I wanted to make something warm for dinner - not heat warm, but spicy warm. I went with the Asian Sloppy Joe's I made a few months ago. It was a shitty shitty drive - even though it was only a mile or two away.

They were so much better this time, now that I put the correct amount of sambal oelek this time (even a little extra for some added umph) and all was right with the world.

But now it starts getting colder. Without wind, our temps will be dipping to single digits as the high, lows probably below zero - then factor in the wind. Such is January. Just usually that's mid to late January weather - so I fear we will be this way for two weeks longer than normal. Bother.

Oh well - I can't do a damn thing about it. Thank heavens, Petey isn't big on long walks in temps like this. Hell, yesterday on his first walk, he pooped in the driveway and immediately wanted to go back in.  I was ok with that.

I hope you guys are keeping warm. I know some of you live in the south and south west, but for those in the northeastern corridor, and upper midwest, I feel your pain.

about 5" on the ground as I type this; been snowing since 5p. we are in for the low temps next.

my asthma refuses to let me step outside, and my boss already called a snow day for friday. we have plenty of food and DVDs to watch and neighbors to look after.

I woke up today in Louisiana in the 30's. We have several days coming that will be in the low 20's. Brrrr! I hate cold weather, but I am so glad I don't have to deal with all the snow you yankees do!

We didn't get as much as y'all, but cold is still cold. And people around these parts go stupid if they even *think* it's going to snow.

I think I need to install sunlamps in my house and just never leave.

We got about 4 inches of snow and it's going to be 8 degrees tonight. Keep warm!

We had about 5" of snow here at the beach, too, which is pretty unusual. (Lots of people have never seen snow on a beach.) Then today it was 52 degrees, so it sounded indoors like it was raining because all the melting snow was running off the roof. On Tues our high temp will be 19 degrees.