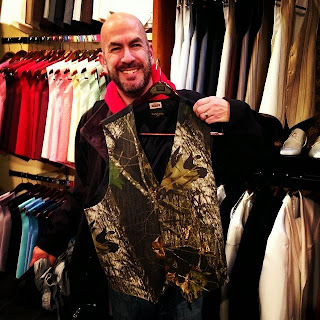 While on our way to yoga yesterday, my cousin and I came upon a lonely lonely woman working at Tuxedo Junction. Even the name sounds sad.

I think the clerk was thrilled to see us, though clearly we weren't there to rent or purchase. Prom season is still a few months away. So save for a few weddings, we were probably the only adults to enter that store in a while.

While you can't really see them, the vests behind me were in all the Miami Vice pastel colours.

I made asked her to pull it out for us to see. And low and behold - Duck Dynasty® wear.  I'd ask, "can you believe it?", but I know you can. To be fair, I didn't ask how it was branded, but to be fair, I'm not sure I really wanted to know.

I did forget to ask what type of tux it went with - or maybe I was afraid to find out they had an entire camo tux. (pssst....I'll ask next Saturday.)

The super sad thing about it is, you know tons of boys will wear it to prom and more fuckheads will choose it as their wedding attire. Sure the bride will be on board - until she brings it up in the divorce proceedings four years later (assuming they aren't already brother and sister and live in the hills in a single-wide).

That Robertson family - aside (kind of) of homophobia, racism, and child trafficking/marriage - is everything that is wrong with America. The dumbing down of a nation for the almighty dollar. And so many are so willing to fill their back accounts. It's kind of sickening.

I'd rather give my money to Crocket and Tubbs.


Song by: Kathleen Edwards
Posted by Blobby at 12:03 AM

Email ThisBlogThis!Share to TwitterShare to FacebookShare to Pinterest
Labels: Shopping

you would look better in pastels anyway. hopefully you did not catch some horrible disease from handling that crap camo.

What's this about next Saturday you've slid in there? Who is getting mallied?

Is it just the lighting or is that a shiny camo? EW! LOL

"the dumbing down" of America. Couldn't agree with you more. Yet so many happily grab hold of the closet camo shirt tail!