Shortly before xmas, Blobby had a fight with his razor - and lost.

It wasn't a fair fight, I was blind-sided. The damn double bladed bastard was creeping around in the dark of my gym bag when I reached in to pull out my iPod Shuffle. I had two very nice and what I though to be quite deep double-bladed cuts on my hand. Ones that you could see quite clearly once the blood was washed away.

"Santa", taking pity on such a poor soul, put a razor holder under the tree - and it had my name on it. If only that poor soul had taken it out of the package, but his razor in it and then slipped the entire contents into his gym bag.

After a solid leg workout and then yoga, it was time to shower. My razor was already in my locker, so I can't blame Hermione's bottomless beaded gym bag from hiding the razor. Nope it was right there for all to see. All but one.

Because of the massive blood loss, things are hazy now. I don't know how I grabbed for my towel and razor, but it's safe to say, once again, the razor won.  Big time.

It's safe to say I felt the pain before I knew anything had happened. I knew I cut myself and worse than last time, but that's it. I had a chance to look at the finger before the blood appeared - and part of my finger nail was gone and I cut behind where that had once been. Ripped right off my body.

The poor Asian kid sitting on a bench a few feet away from me, snapped his head up at the sound of my vulgar language. He was probably trying to translate while understanding the severity of my tone and putting it all together.

By this time there was blood. Lots and lots and lots of blood. As gross as it sounds, I put my finger in my mouth to minimize the Amityville Horror scene. And oddly enough, I didn't want to get the white gym towel all soaked in blood, so I didn't use it to put pressure on the wound.

But I had to figure out how to get a band-aid from the front desk, while wearing nothing and knowing getting clothes back on would mean not only massive blood loss, but stained stained clothes.

Ruckiry (not Jon's boss), a guy I kind of / sort of know from working out was about to go out onto the floor. I axed Bruno (hand to g-d, that is his name) if he could go get me a band-aid - as I stood there naked before him. He was a prince and came back with two. By now, the blood was covering most of my hand, no matter what I did.

I applied pressure with tissues to no avail. I thought, "fuck it". I dressed the wound and went off to shower, thinking I could just make it home for antibiotic cream and new Curad. Even covered. the blood soaked through the adhesive. Even covered, the hot water made me whimper in pain.

My discomfort was little compared to the guy across from me in the shower who was seemingly very very shy. I would find out in a minute when he did turn around to see his peen encased in a chastity device. I kid you not. I wasn't really looking, but it was hard not to notice.

It's fair to say I've seen just about everything at this gym now - except actual sex.  ...and lord knows this guy wasn't having it.

Clearly he got over his shyness to a point and just walked out into the common area not covering himself up one little bit. At least, for a moment, it stopped me thinking about my finger. Apparently in the shower, I didn't even notice the big pad lock around his neck. I saw that as he was blow drying his hair!

Anyways, I went through two band-aids before the bleeding slowed down. I washed the cut (again), applied ointment and redressed the cut. I've seem to have clotted, though I don't see a Downward Facing Dog in my near future, as it will just open up the wound. I should be able to lift.

Here's another iffy pic for you. 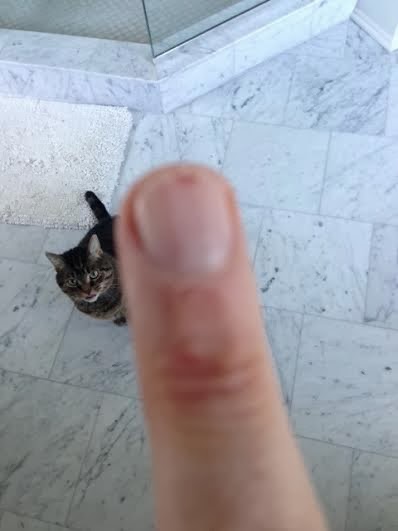 The Apple device has been trained to focus on furry animals instead. Again, it would not focus on the finger for you to see the chunk taken out of my nail and finger.

The bandage makes it hard to use the touchpad on my Mac. I really don't know how amputees do it! I'm wondering if I'll automatically get my handicapped hang-tag just sent to me or if I'll have to go apply for it.

...and it might go without saying. The razor and its case are now in my gym bag, for safety!

Song by: Foo Fighters
Posted by Blobby at 12:07 AM

LOVE the innocent sophie photobomb though!

I'm willing to bet the guy in the gym was doing what he'd been told. Still, makes for a good tale at a bar.

The shower scene reads almost like Janet Leigh in one of Hitchcock's films.

YIKES! I was both cringing and chuckling as I read this post. I hate everything having to do with injuries or surgery - can't even watch recreations of it on TV, yet your comical delivery of the surrounding circumstances allowed me to get through the post. Good job, and I hope you're feeling better. Sucks about no yoga until your finger heals though.

I like how one of your first thoughts was to not dirty the white towel. That might have made me chuckle.

I sliced a fingernail with a razor blade years ago....not only painful and bled a lot but a really disturbing injury that persisted for weeks.