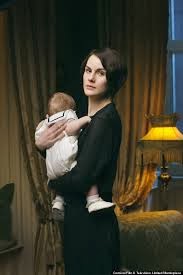 I'd say "poor Edith", but maybe she will find happiness with a soon-to-be ex-pat (well a British ex-pat) who has a lunatic wife. It could happen.

But if history is any indicator with Lady Edith...well then.....oh, poor Edith.

So we are into season 4 of Downton Abbey.  I know Morty has been anxiously awaiting every twist and turn on this early 20th century British version of Bold and the Beautiful.

I know life after wartime has changed and the class system isn't what is was pre-WWI, but the downstairs folks seem to be overstepping their bounds way way too much with the upstairs residents. All of them: both Bates', Carson, Mrs. Hughes. Who the fuck do they think they are?

I fear that cousin Rose is just the earlier version of cousin Oliver - albeit, one who drinks at clubs that have "colored" men in attendance, wears a dress, sleeps with married men at Warwick Square and fancies to dance the Charleston, but you get the idea. Actually, Oliver probably ended up doing all those things too, now that I think about it.

The first two hours of Downton were good - especially that nasty nasty baby nanny and when Mary came out of her funk. Had that dragged on a minute longer, I would have lost interest.

However, Funny or Die is actually not death this time out.

You know me, if those are your options you'd better be fucking funny (which it rarely rarely is). If the the video is not embedded (yes, it's questionable that it's working), you can click here.

Song by: Emmylou Harris
Posted by Blobby at 12:04 AM