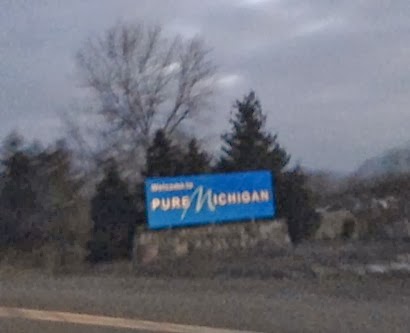 It's not often I drive for something work-related anymore, yet here I was - heading to Michigan.

I'd say to Detroit, but technically I was a little north west of city. It's not the bankrupt, depressing part of town, but actually much more of a high scale area - in theory.

My big brother in my fraternity was from Bloomfield Hills and he went on and on about how nice it is. Granted, the Target looked nice, but where I was going to looked just kind of so-so. I'm sure I wasn't in the "right" part of town.

I'm not so sure what is so "pure" about Michigan, but it seems to be in the welcome sign and any number of license plates.

You know me, here I was after crossing the border and soon I noticed I was the only foreign car on the road. In the 80-90 minutes into Michigan, I can count on two hands (and I may have actually done that) the number of non-American cars that I saw. And four were Honda Accords, which are built in Marysville, OH....but since they are Japanese, I counted them as foreign.

And most of those non-domestics were in Bloomfield Hills - again, a tonier 'hood. But until you got up there, it was all the Big 3.

It was almost like when Morty and I stopped at a McDonald's in Meredian, MS. We pulled into the lot, mine being the only Toyota....mine being the only Japanese car. With two homos in it. One of us wearing a Star of David earring (um, that'd be me).

I guess the need to serve a combo meal was greater than killing us both, but I wondered if we'd get out alive. I kind of felt that same pang yesterday.

And I didn't see Slim Shady, the real Shady - or the imitating ones either for that matter....but I passed his street. 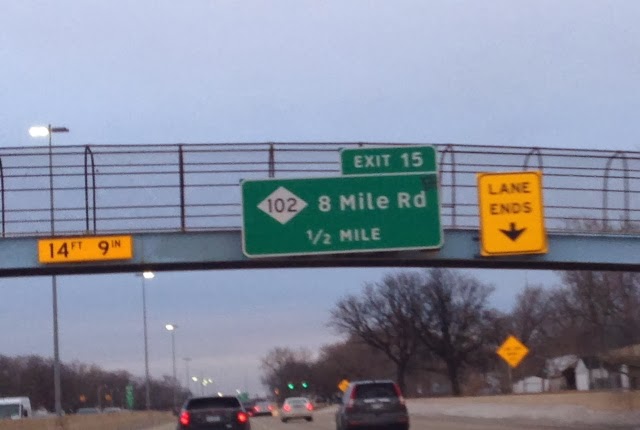 Iknow this area: I recognize these signs you posted on FB.