Midnight at the Oasis 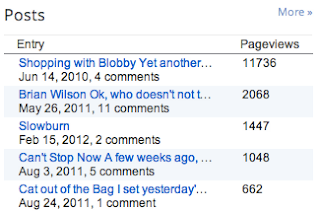 Back in July, when having dinner with Mike, Peter and 710, Peter asked Mike and myself a question regarding our respective blogs:  which was our most popular post.

Mind you - that is not determined by us the writer, but by you, the reader.

I'm sure Mike gave an answer, but I probably wasn't listening to him. He tends to go on and on.  I'm sure my mind wandered to some shopping list I was making in my head.  :-)

But immediately, I knew of mine.....though there is some room for error on the answer.  I'll start with those parameters before getting to my response.

With my starting on Blogger, then to WordPress and back to Blogger, I clearly lost some counts of how many hits I've had, let alone by individual post. Then I was in and out of Google Analytics and even Statcounter, so there is no one counting device that tracked all my hits.

But out of those, almost 12,000 are a Shopping with Blobby segment - the one on how to avoid Camel Toe.

Poor Peter.  He had to ask what camel toe was.  Poor us. We had to explain it.

I don't check my stats too often, but whenever I look, Camel Toe is in the number one position. My sweet thai chili chicken recipe has been a close number two last week and last month (you can sort by day, week, month and all time) - who knew?  Maru is still up there, but he's a feline internet star - so that's to be expected.

Brian Wilson is up there too - but he's a hairy beast baseball star, so......there's that.

Anyhoo - Peter suggested Mike and I both write about our most popular posts. I did. Mike hasn't.  Of course, I don't think Peter reads my blog, so I don't think he'll know I've done this.

Song by: Maria Muldar
Posted by Blobby at 6:43 AM

LOL sadly I had to go look what camel toe was too, I'm so out of the loop.

My most popular post was a rant about this school forcing a boy to cut his long hair. I suggested that that football player with the long hair (he does Head and Shoulders commercials) go TALK TO THEM. A few days later he was in the news for something and I had 35,000 hits in one day! It is over 50,000 now.

I like to look at the key word and referring links. I get most of my hits from Google Searches.