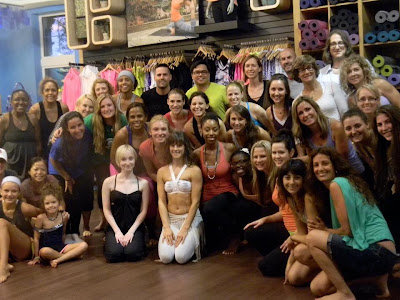 For those naysayers who commented a few days ago, that if there wasn't any video, then my belly-dancing class didn't happen.

Granted, there is no video....that I know of.

Well, that's not true. At the end of class, our "instructor" (seen kneeling in the white hoochie-mama outfit) did a demonstration that many people filmed. I was truly surprised how many pulled out their smartphones and went to town on videoing here.

The other two guys definitely did, but so did so many women. Maybe womyn. I don't know. (yes, the guy in black was key-uuute, and apparently a cross-training something or other....but he didn't seem there for the dance or mockery of the event like others I know).

But the person who went around did go and post 7-8 photos on FB, which is where I grabbed these. The ones I know were taken, at least of David dancing, did not get posted there. I'm not sure that's a bad thing.  ....but it doesn't prove we danced, it just proves we were there.

The above image (which you can click on to enlarge) clearly shows the two of us after class, in the group shot.  See upper right corner. I love how we're all leaning in to get in the shot.

The image below is us watching the instructor shake her coconuts. 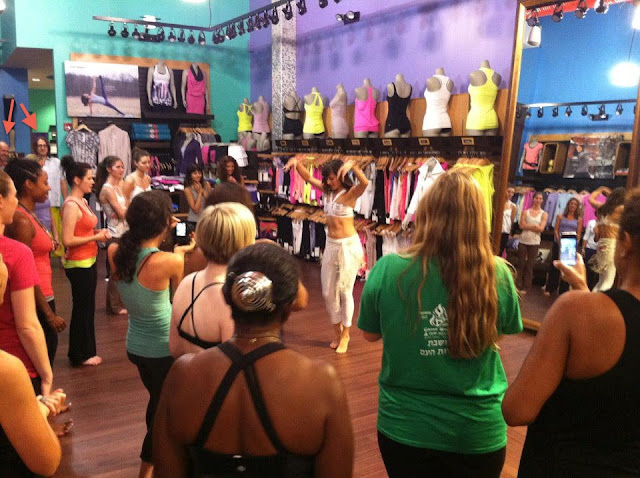 I gladly put red arrows depicting where we were standing and watching....and you can see, we did try to stay at the back of the class, even for this. See upper left part of the image for us.

I don't think we'll be doing this again. I'd say I won't, but if pressed, or asked, I probably would. I mean, they serve wine afterward!

Song by: Junior Senior
Posted by Blobby at 6:50 AM

Did you dance in a store? I see merchandise. (Also: you're no shrinking violet, but just how tall is David?)

what sort of wine?