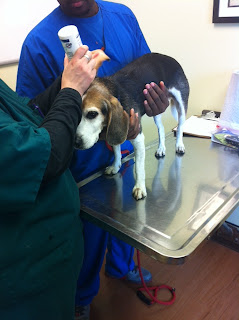 You asked for more Petey, so I'll give you more Petey.

The old man had his first vet check-up....while under our care. When he'd come in from outside, he'd dig at his ears for 10 minutes or so and then settle in. And his snot-sneezes.  You've never seen so much snot from man or dog.

The vet tech loved Petey (though 710 says "I bet they "act" that way with every dog") and Petey have her licks. The actual vet got more licks than the tech.

But Petey was good with them. The African-American tech you see in the pic had a huge bandage on him. The little Pomeranian we had seen in the waiting room when we arrived got him as he was trying to trim her nails. I think Lamar was happy to have to just steady a friendly pooch like Pete.

Yes, they cleaned some gunk out of Petey's ears and even put a solution in that hardened and will melt away over the next two weeks, that will clear up his problem. We'll have to clean out his ears every two weeks though - but no biggie.

His lungs are good. He has no heart murmur. The vet said he could stand to gain another pound or two, but other than that he's in very good health. She said she'd never guess him to be 10 1/2 years old.

That last part made me feel good. All of it did.

He was the model doggie for a check-up........except that he peed all over their floor while we waited in the exam room. 710 cleaned it up before they came back in.

Speaking of - Petey and 710 get along famously. Personally, I love it when he jumps up to greet us - which he's doing more often. But this was just a drive-by in the doc's office. 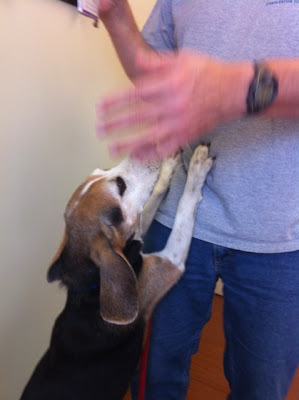 710 loves it too, though the might not as readily admit it.

We go back in two weeks for his follow-up and his annual shots. For those, I might have to step out into the waiting room.

Song by: John Mellencamp
Posted by Blobby at 7:01 AM

Petey's so cuuuuute. Who's a good dog?

Have you found more people approach you when you're out with Petey? Or did your rugged good looks always draw a crowd?

I loves me Petey.

I love Petey too !