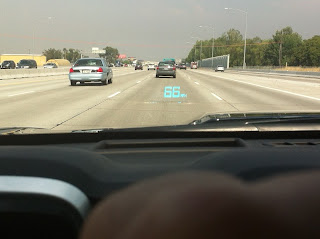 Lord know what's going on in Boise - do people come here for big conferences?  College football has not started here yet.

I say this, as when I tried to reserve a car rental, the first four national companies had no available cars. None!  What gives?

So, since supply and demand was in play, I finally got one for an exorbitant amount. But what could I do? It's not like cabs are plentiful out in Idaho.

Anywho, I reserved the most economical size, but when I got to the counter, the clerk asks, "is it just you?". It wasn't a pick-up line. Or if it was, I completely missed the come on. Probably wouldn't be the first time, nor the last.

I admitted it was, and he said he could give me a brand spanking new Camero for the same price.

I've never been one for dick extenders muscle cars, but even I have to say in the last few years the newer Mustangs and Cameros have made me smile a little at the auto show. And I've never driven one.  I can now cross that off my list.

Yes, the car is sleek - and it moves like a motherfucker. It went to 95 mph easily and felt like I was going 55. A dangerous thing, but the speed limit here is 75, so I was only 20 mph over. That's nothing, right?

But the coolest thing about the car is the windshield display, as you can see in the title image and the one below. 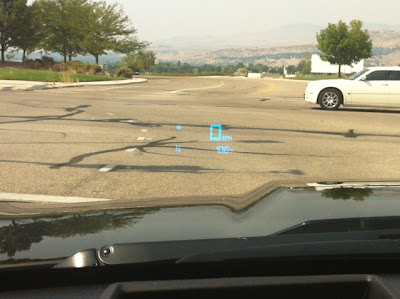 While there is a traditional speedometer, temperature gauge and turn signals, they fricking show up on the windshield. Oh, if you're on XM radio it also tells you the channel, artist and song.

The only thing distracting about it is when you're driving and trying to take a picture of it - not that I did that. Ignore that top pic of the speed of 66.

Since no one else was in the car, I can't confirm, but I don't think a passenger can see this. I think the display is only positioned for the driver view.

It's nice to rent cars like this. It gets them out of your system - not that it was really in my system, but one of those things you can cross off.  It's not practical - but I suppose that is the point for most men with smaller dicks trying to recapture their youth.

Song by:  the Dead Milkmen
Posted by Blobby at 6:31 AM

While I LOVE my convertible, I do miss the power I had with the Bonneville. Man, she could move. It was great. But now when I have the roof down, I find that I tend to go UNDER the speed limit and just zen out. Very therapeutic.

I think I would stare at the blue number and not pay attention to the road.

AMC Hornet, most bitching car I ever drove. no power steering makes you into a real man!