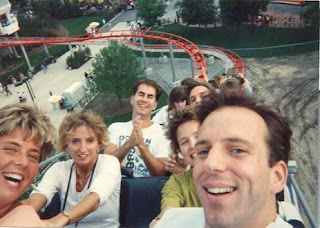 Usually when I do a vlog, it's just the video, no text.  Today is different, at least slightly.

710 and I went to Cedar Point this last weekend, alone, by ourselves!

I wasn't planning on videoing a thing until I'd say we were halfway through our day and then I started to see if I could formulate a vlog post.  But it turns out, without going back to replicate a number of things - which I was not willing to do - there wasn't a lot of cohesion to the video that I did shoot.

So now, you get some set-up, some context (but only some) and then of course, the video.

This was the first time in almost 20 years where we haven't gone to CP without kids - nieces and nephews. And while I adore them, they're too timid, too short, or too impatient to ride the adult coasters. So we've missed out on a lot since then.

This time, it was just us.

It worked well - and it didn't.

Our first two coasters were a mistake. The Mantis is a stand-up coaster that warned you to take out earrings. Not an issue, but I ended up seeing why. They pull over security rack banged your head and ears so fucking hard on the ride it was no fun at all. None.

The next ride, the Mean Streak, is one of, if not the, tallest, fastest wooden coasters in the U.S.  3:10 minutes is a long time in coaster rides - and it only had a 10 minute wait. But it came at a price. 1:20 minutes the pain in my back was so jarring, I was cringing ahead of time thinking of each hill and turn. Seriously, on that pain chart they give at the doc's office, it was easily a 9. I was on the verge of tears.

When getting off, we thought we had made a mistake coming and that maybe we were too old for this.

But 710 talked me into going on the RuPaul Top Thrill Dragster!  It takes off at 120 mph (not kidding) and shoots you up 400 ft and over one curve and then 400 ft down. The ride takes 17 seconds.   We've seen it not be able to make it over the top and come back down - backwards.  Yikes. Which is why I never wanted to go on it.

I was cursing 710 on the 45 minute wait, but I was wrong. The ride was SO worth it.  And you gotta figure, you can do almost anything for 17 seconds (though my iphone timed it at 23.4 seconds!).

You can't really take pics on coasters these days.  They're too fast and oh, my iPhone is considerably more expensive than a disposable camera.  ...but you see me with hair.  ...and thin.

The Magnum is still a blast - and Millenium Force is over the top incredible (no sides to the car and no steps down the incline if you ever got stuck - oh and 310 ft down!, but it's the second hill that is the fun one). It is totally worth a 75 minute wait.

So yeah, we ended up having fun - though for two times now, the Maverick (yes, most of the coasters start with 'M') has been so backed-up we couldn't get on. 12 seats per car - are you kidding me?  Oh, and it broke down as we  and waited and waited.  We finally gave up.

So - that's some of the background.  None of the video is in any kind of order, but it's just meant to be fun - that's all.

Song by:  Everything but the Girl
Posted by Blobby at 6:40 AM

What they say about the young at heart is true.
Better you than me.
It sounds like a thrill though.

Very nice vid, Blobby. Glad you had a wonderful day.
My first roller coaster was the Blue Streak, and I chose that one because I thought someday when I was forty-something I didn't want to have to admit to anyone that my first one was the Mine Ride. I'm not kidding, that was my train of thought back at age 11 or so. I was terrified my family would come to the Mine Ride first and I'd have to go on it. So when we walked up the midway and got to the Silver Dollar Cafe I bolted towards the Blue Streak and forced my family to chase after me. My plan worked and I got to ride the Blue Streak first. :-)

Love this! So wish we could've experienced this day with you - maybe next year.

I remember back when it was America's Roller Coast. I went on the corkscrew, that was enough. Also, what on earth is the thing that 710 was under the illusion he would get you on, and apparently succeeded?

That thing was the Windcharmer (?). 311 feet off the ground. Swings. Going up was fine. Coming down was fine. Even the slow even turning was fine. Faster and at an angle, not so much. Blech.

The vid was fun. Can't do those anymore, I just get nauseous now. But my brain really wants to.

I miss roller coasters. About the only thrill I get these days is coasting up and down the hills in the truck out here where I live.