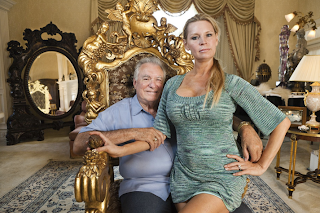 We are woefully behind on our average of one movie per month. Currently, we are three behind.

Last night, after dinner at David & James' house, we all headed out to the movies. When I asked David if he was interested in seeing the Queen of Versailles, he just about squealed.

I had to remind him it really wasn't about Marie Antoinette. He knew that though - or so he claims.

The movie has almost to do with the economic collapse of 2008 as it does with this family of hoarding, clueless spendthrifts.

Yes, the movie has 'queen' in it, which makes it sound like the trophy-ish wife is the focus - and in a way she is - but the husband, 34 years her senior, is no prize. Their kids are spoiled little brats who made me want to smack the shit out of two of them....and I'm not sure a judge in the world would convict me. They made me mega-uncomfortable.

Actually, the entire movie made me mega-uncomfortable.

The opulent lifestyle of these subjects compared oh, to say that of the Housewives of Beverly Hills, makes that group of women look like commoners. Not to say the movie folk had any style or taste - they did not - but their amount of wealth and spending made those Beverly Hills folks look like they lived in a double-wide.

But the movie was D-pressing.

When it was over, I turned to the boys and said, "that was more depressing than Shoah."  ...and in ways, it wasn't an exaggeration.

Discussions about certain scenes followed the movie, of course. The four of us like to dissect movies after the fact - be it Harry Potter or this. With a bevy of Housewives and any reality shows, this seemed to kick it up a bit in a sad tale that still seemed a little staged.

Going to Hertz to pick up your car rental and asking the name of your driver to me smacks of staged movie-making.

To me, there was only one somewhat redeeming "character" in the movie (the husband's son from his first marriage) and David even liked "the queen", as he thought for all her misguided shit, she still loved her kids and understood her humble beginnings even if they lost everything. James thinks she manipulated people like David to think that.

I'm not sure she's smart enough to manipulate anyone, but you never know. Personally, near the end, the husband / former billionaire asked the filmmaker if 'this is almost over' - meaning the filming of his interview.  I was hoping the same thing - for the movie.  It was painful for me on many levels.

But on a good note, we saw four previews and each one looked more than decent - some better than others, but it's something.

Song by:  Robert Plant & Alison Krauss
Posted by Blobby at 6:56 AM

he's a slob and she's a cunt. OH SNAP! talk about being judgmental!

yech to these types.

So... it was "The Wild and Wonderful Whites of West Virginia", but with money?

I hear it's like "Precious" but without AIDS and black folks.

Mariam said...
This comment has been removed by a blog administrator.
3:49 AM EST