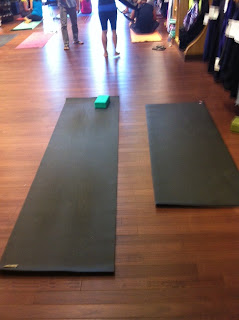 Tired of me talking about yoga?

I've been enjoying my Sunday morning yoga classes a lot - and maybe it's my imagination, but each one seems to get harder than the last. At our after practice tea session at B&N, some other class folks confirmed this.

While I haven't given up lifting, I haven't done it for almost two weeks, and you know something, I don't miss it. I know I need to get back to it, but I'm enjoying yoga much more.

Mid-way through, the instructor had us attempt Dolphin pose. In certain ways that was the end of class for me.

My arms were covered in sweat and when I had them pressed on the mat, there was no getting a grip, for this pose of many of the ones to follow.

I'm thinking I'm working a lot harder in these classes than in my previous studio. The sweating is a lot more and it ain't pretty. David and I were talking about how respective spouses would like us to shower sooner than later after class is finished.

But I am thinking I need to buy one more yoga necessity - a towel that actually covers the entire mat. It's the only way I kind of see this working if I'm going to attempt this and not fall on my face.

Per the two folks in line at B&N, both have them, one says it works great, one says it's worse than a slick mat. They both have the exact same towel. She uses it to wipe herself off during.  He covers his mat.

I rarely ask advice here, but does anyone use a yoga towel over their mat - and if so, does it work?

If you look at the above image, you'd think Herve Villacheze (sp) was working out at the studio.  ...but no.

Yes, I fit on my mat, kind of, but I do fit...mostly. But I didn't realize how ridiculously small mine looked next to his.  (that's what she said!)

No, but seriously, I'm just talking about the mat. 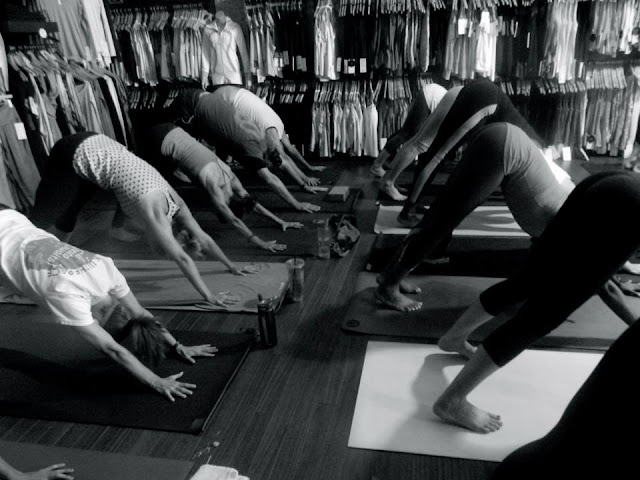 Oh - and this is a pic from Yoga Without Borders.  I'm in the last row, closest person to the rack - and by that I mean the clothing. 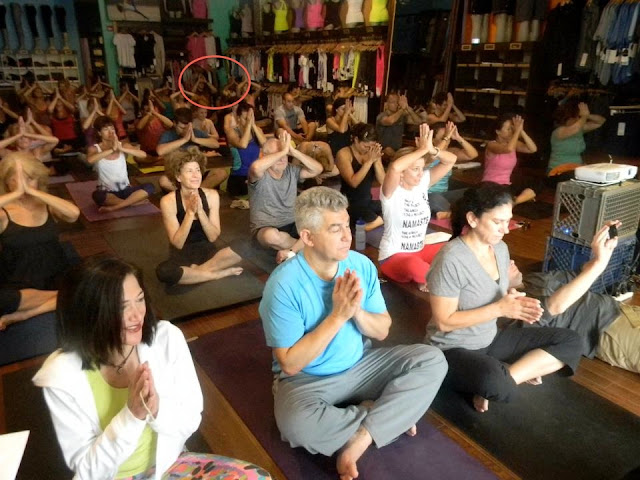 Then here we are (in the circle) gettin' our zen on.


Song by:  Laurie Anderson
Posted by Blobby at 6:39 AM

That big mat means someone is compensating. Just look how small it makes his little green block/cock look.

Look what yoga does for Sting, Madonna and Ricky.

I wish I had more self-discipline to not giggle when I'm attempting to do yoga. I'd probably do it then. More power to you. Yoga power. ;-)

I too am envious; I used to do yoga daily and have not in years; I felt a lot better when I did so.

I regularly use a towel on my yoga mat. I used to use an ordinary towel, then I got a Lulu Lemon yoga towel for free and have been using that. You need to make sure it won't slip under you. I still sweat heavily and bring either a washcloth (in winter) or something bigger (in summer) to wipe myself off.