You Better You Bet 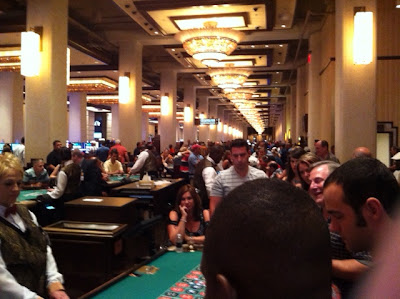 I was underwhelmed by Ohio's (and Cleveland's) first casino.

Actually, I'm surprised I went as early into its existence as I did - it opened in mid-May. People would stand in line for hours to get inside. HOURS!  Outside, in the elements, with no facilities, you know, in case you had to "go".

As friends and us were trying to figure out where to go eat dinner downtown, 710 mentioned after eating, he'd like to see the casino. The dye was cast. One of the friends insisted on eating at the buffet at the Horseshoe.

Sorry, but buffets are buffets, no matter what MCL or casino you venture into. Always variety, always some better than decent items and a lot of not so decent items. Notice, I didn't say "good", but decent.

As a child, when eating at a place like this, my father would say my eyes were bigger than my stomach. They still are, but my brain processes the eating portion a bit differently. Saturday, I stopped eating something if I thought it was just fair. I wasn't wasting my time, my stomach or the calories when there were other selections to be had.

I was jabbed a bit for getting salad. I was told not to waste intake on things like salad on a buffet, but I like salad - so I got two different kinds. Sue me. The chicken papirkash was awful, as was the taco bar.  Creamed spinach was some of the best I've ever had, ditto with the fried chicken.  Braised chicken?  Not so much. One slice of pesto pizza was very good. The pork rib was so-so.

Yes, I know you wanted to know exactly what I ate.

I had a better time just sitting there talking, but one of the friends was alllll about the buffet and going back for more.

Then it was upstair for the casino.

You've seen one you've pretty much seen them all. I wanted to see what they had done with the old Higbee's building. You'd know it as the store where Ralphie and his family went to see Santa in A Christmas Story.

Not a lot of room to move in there. Besides being PACKED with slots and tables, I'm assuming people-wise, they were close to capacity. This is good for Cleveland's economy, but bad for me, who is ok to not deal with massive crowds.

I kid you not to say that every table we saw had zero spaces available to play. You'd have to be one patient gambler if you really wanted to role that die or place a bet.

I suppose this place could get away with this since it was a Saturday and there was no shortage of hair-brained people were clamouring to part ways with their money. I just wasn't one of those. I suppose if I ran the place, I'd have jacked that minimum up as well. Supply and demand, baby.

I did play two rounds with a slot machine, which are not like slots anymore. The games don't clearly make sense on what is supposed to happen, so I was bored quickly, especially since I lost both rounds.

However, I did see this slot machine. I imagine it is one that brettcajun would be drawn to. 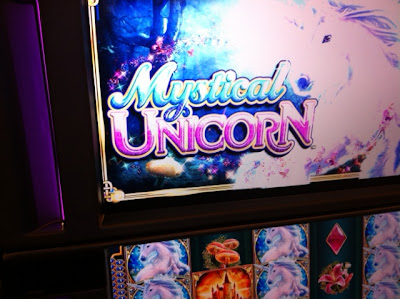 The only thing I ever like at a buffet is the dessert bar. I can totally tear that up. Although that whole chocolate fountain thing freaks me out.

I enjoy going to casinos, if only to people watch; a seat by the ATM is the best for observing tribal behaviors.