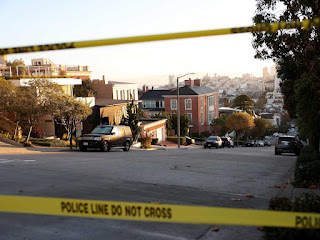 I honestly do not want to write about the would-be attack on Nancy Pelosi, and the actual attack on her husband
Pelosi is a middling politician at best and a fairly crappy Speaker of the House. That said, I don't wish harm on her.
And that makes me a hypocrite, because I'd have been ok with someone cold-cocking Paul Ryan to the point he got a TBI. The difference with me and the GOP is that I admit I'm a hypocrite.
Hopefully that is not our only difference, but.........you never know.
Isn't this attack just a redux on an individual level of January 6th?  Or the personal attacks - physical and otherwise - since BLOTUS became a candidate back in 2015?  It's just on another level.  ....and mark my words, the first of what is to become a string of them.
As 710 pointed out, next time it will just be explosives put outside their (or someone like them) house. Not even a stretch - and the FBI, with all its wisdom, has yet to find who placed two bombs at the Capitol.
We, as a nation, are closer to the verge of a civil war.
There is no stopping folks like this. And it's not like the GOP is denouncing them or their actions.
Verbal sparring got Rapist Brett Kavanaugh Congress-appointed security after his decision on Roe v Wade. He got a-scared by people protesting in front of his house or harassing the restaurants to which he patronizes. Imagine how upsetting that might be compared to sexual assault.   ....what kind of world is this when you can't order your lobster bisque in peace.
I have yet to hear Congress act on security for the Speaker. And for Kavanaugh, they approved it in like 36 hours.  You know they won't do a thing for a democrat, let alone a woman.
Every time you think this country can't get more fucked up, they prove me wrong.
Song by: the Beatles
Posted by Blobby at 12:07 AM

Hasn't MTG just reacted by making some in(s)ane tweet about her 'thoughts and prayers' going to Mr Pelosi? It was something on those lines - I can't find the exact tweet. One wonders what she would have said had the attacker actually met up with his intended target, and it had been Nancy P. with the fractured skull - or even worse. MTG has, of course, already called for the execution of leading Democrats - AND she recently had the infernal gall and brass neck to recently tell a rally of her lunatic, crazy, cheering supporters that it was the DEMS who "want Republicans all dead"! Sheesh!!! Words fail - 'cos there aren't any adequate ones!

RB -I haven't seen the tweet, but if true, it sounds like it was another 'thoughts and prayers' for Mr Pelosi. Not a denunciation of the act or people who act out in that manner.

Nice try, you two. You almost had me digging through MTG's tweets to dig up the apology, but I pulled out just in time. (That's what Herschel Walker said.)