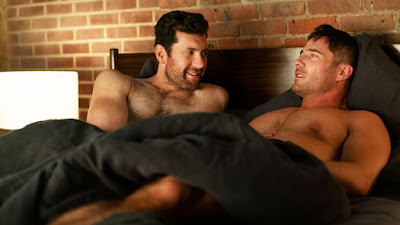 We did our gay civic duty and went out to a cinema to see Bros.
I haven't seen the box office tally for opening weekend, I can just say, including us, there were four folks in the theater.
Honestly, when you're official movie website is sixth (!) in choices when typing 'bros movie' into Goooooogle, you might have some issues.
And the movie has some issues.
I could wait till the end of this post, but doing right now. It's a C.  And I'm being generous.
710 said he felt a certain disloyalty ranking it so low, but being queer watching a queer movie doesn't give the creators a free pass.
There are slight spoilers ahead, but honestly, if you have seen any rom-com, you know how it turns out before the coming attractions finish.
The premise is tried and true - and all been done before. Most of it in When Harry Met Sally.....right down the walk turning into a run, to the big event, when you finally realize your true feeling after all.  Hell, they even stick another Meg Ryan rom-com clip right into the movie.
2x4?  Here's my head.  Do your thing.
I do love that the entire cast (at least the primary and secondary players) are all queer. That's not a small feat. Some of them not used nearly enough.
But if we have to draw an issue to the film - and we do - it's the co-writer and co-star, Billy Eichner.
I loved Billy on the Street. Eichner's screaming manic behaviour was great for the 5-7 minutes the shows lasted.  Ditto with his scenes in Parks & Recreation. On the big screen, he doesn't work. Not in a lead role. Not in a lead romantic role.
While he's not really screaming at the beginning of the movie, there is that mania where he just won't shut up and quite frankly it's exhausting to the viewer. And this is coming from someone who likes him. And compared to his co-stars, he's quite stilted in his acting and delivery.
Luke Macfarlane - whom I've never heard of or seen - was infinitely better. And easy easy easy on the eyes.
It's petty, but Eichner's overly styled to make it look not styled at all facial hair and the dime store glasses he wears make him non-appealing. But it's mostly his acting.
I get, and you get, all the points they're trying to make, but it just falls flat.
I have to believe Debra Messing being in it and addressing her at all times with both names was a contractual obligation on someone's part. It's unfortunate that they took an opportunity with her and blew it. They do absolutely nothing with it at all.
So, I guess at least one person in the movie isn't queer.
I did like a lot of the LGBTQ+ cast. I thought in some terms they did a great job with the roles given. Bowen Yang from SNL ?   Meh.
One huge downer:  the original song that Billy Eichner sings. Yes, the cast had tears in their eyes, so did I, but I suspect for different reasons.
You might want to wait till Bros hits a streaming service before you shell out and go to the movies.
Speaking of Spoilers:  in the new George Clooney / Julia Roberts movie where they play contentious ex-spouses?  They totally end up together.  It's not out yet, and I won't see it when it is, but mark my words.

Song by: the Black Keys

Someone - who is always up to see a movie - is keen on seeing this.
I will tell him of your thoughts on it.

The movie may be a C but I'd at least give that picture on top an A.

We went to see it here in Boston (the matinee show on Saturday) and while it wasn't sold out it was more than half full which may not have been a surprise since it was not great weather here.

With regards to Eichner's acting, I agree with you but that's where we depart. I thought it was funny (uncomfortably so in a few scenes) and as a die-hard RomCom lover, this followed the formula.

I don't expect a film so entwined with a modern day gay romance to be a box office success. I can't see middle America warming up to their sex scene which had our audience laughing out loud.

My two cents worth: Eichner blew it. There is nothing fresh or relatable in this film. The characters are not relatable, the situations have been done to death, and most people don't relate to the characters because they aren't cut from real life, living in the real world.