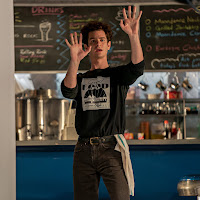 I'm 100% sure I couldn't have picked a worse movie for a Saturday night.

I mean, I suppose I could have picked some slasher movie that makes me cringe not just due to gore, but the by-the-numbers tiresome film making.

Instead, I picked  tick......tick......BOOM!.  A frickin' Lin Manuel Miranda directed musical about a frickin' musical.

The mundanely made slasher movie might have proved a better selection.

Why I did this, I have no idea. You've all read I'm no fan of musicals - especially more modern day ones where things are all so generic and by-the-numbers tiresome songs and arrangements.

tick x2 Boom is a semi(?) biography of Jonathan Larson, who created Rent, which this movie is about that play's semi-creation. I don't think you want me to start on the void that is that play.

I found the main character's mini-rant about the mega-musicals on Broadway having no originality when Rent itself is an adaptation of La Bohème. Dying of TB seems less painful than sitting through Rent or this movie. Naturally, being Broadway in the early 90s, there is an AIDS thread, which is done fairly well.

The songs are mundane. The continual breaking down the fourth wall is tiring.

Andrew Garfield - one of the many Spidermen - did a decent job. I think he had the energy and talent, but I don't think the material was there with which to work.

Miranda loves Broadway and musicals, so a lot is over the top. And he uses folks from that genre, including a number of folks from Hamilton and other shows. A lot of cameos from Broadway stalwarts. The one casting that actually worked was Bradley Whitford as Stephen Sondheim. Miranda mostly wastes Judith Light.

The movie probably isn't bad for folks who like or appreciate the genre. It's just not me. I have no excuse or explanation for picking it. This was all on me.

Sounds like I'd prob'ly get more out of this than you did for two reasons. Musicals are my 'thing', or at least one of them - and Lin-Manuel M. is still, for me, the 'wunderkind' of our times in that field. Anything he's involved gets my complete attention.

I can top you with 'werewolves on wheels'. the only good about it is seeing a young Meryl Streep get eaten.