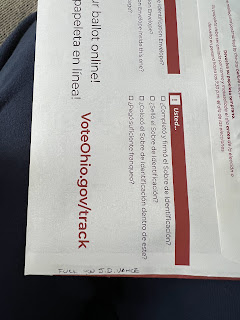 I don't presume that everyone's build up to the November 2022 election is as horrible as Ohio.

Ohio any more is just contentious in the best of times. Since the 2016 BLOTUS run until now has just been downright hate-filled and depressing AF.

Honestly, we can barely stand to watch Jeopardy, as that's when the ads seems to take place. One right after another - that may as well have 2x4s with nails in them hitting their opponents.

These started in MARCH.

Yes, it was for the primaries, but they've never stopped. Never slowed down. TV advertising must me way less expensive than I expected. I just cannot fathom the candidates have this much money.

And yes - the candidates. Not PACS, as they are running their own ads.

Our U.S. Senate race is the biggest one. I am so not a fan of the democrat. I believe him to be the Joe Manchin of Ohio. When I told this to a colleague who asked me to go to an event to meet him, I was disinvited. They weren't wrong to cancel me.  The same person also asked and rescinded an invite to meet Nancy Pelosi this week.

Again, right to not include me.

But the republican opponent is a putz named J.D. Vance. You might know him as the author of a well known book and tv movie I didn't read or see, Hillbilly Elegy.

During the BLOTUS run in '16 and most of this term Vance was outwardly and vocally anti-BLOTUS, But now his tongue is firmly cleaning the inside of BLOTUS' colon on a daily basis. What a guy will do to win is incredible. Nor backbone. No conviction. No morals.

Ya see - J.D. needs someone to blame for his mother being a crack whore.......and which better way (well other than making a bunch of money writing about it) than blaming those filthy Mexicans that we let into this country by not building "that wall!".

I mean, sometimes you're a filthy crack whore because you like giving away your body for crack. I've done a lot more for a lot less. But republicunts don't believe in personal responsibility. Blame and distraction they get.

But I've voted. I dropped off the ballot last Sunday. Whatever I think about Tim Ryan, I think less of Vance.   ......and you might be able to see if you embiggen the image.

I have zero idea how this will turn out. If you are on FB and get political anything, whatever candidate is in your feed is always down by 2%.  Always.  They just need a "little" more money to win.

For people who don't read the polling data - we have a democratic candidate for governor, but I can tell you she's not near 2% off.  More like 22% off. She's so poor ("how poor is she???") that we are two weeks (?) away from the election and she's the only person who hasn't had an ad.

Ryan did gain some points at the debates - saying Vance is pro-cop, but then how he was asking people to raise money for the insurrectionists who assault police officers - and backed it up immediately with Vance's own Twitter feed and emails. The guy couldn't even try to rebut it.

Unfortunately, with voters, facts make very little difference. I guess we'll just see who turns out at the polls. But if Vance loses, I'm sure "stolen election" will be at every GOPer's lips.

Email ThisBlogThis!Share to TwitterShare to FacebookShare to Pinterest
Labels: Voting

One would hope that Jeopardy viewers would be more discerning.

I'm glad I am not in Ohio right now, is all I'm saying. (Texas or Florida neither.)