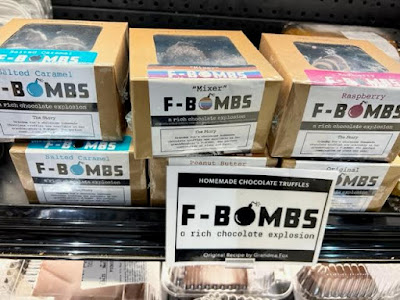 Listen - straight men like chocolate too. One just has to be creative to have them buy it.

My brother-in-law was in charge of birthday dessert a few months back for my sister. They've basically given up sugar but don't gloat about it. And they were having guests over, so you gotta get birthday cake of some sort, right?

I mean, they invited me and everyone knows that I haven't given up sugar.  So he got these things called F-Bombs.

Homos and others call them 'truffles'. Since my brother-in-law was the one who get the F-Bombs, I'd say their marketing department nailed that campaign.

How else does one get a football loving, golf playing guy to purchase truffles?  Imply the word 'fuck' and some guys will be grabbing for their wallet.

The things is: they're good.

Better yet:  portion control.  I'd eat a huge piece of cake, but instead two F-Bombs and I'm set.

The above you see are only some of the flavours.  Raspberry are good. Peanut butter is a bit much - and I love peanut butter. The birthday cakes ones (not shown) have a semi-creme center. The traditional ones - chocolate over chocolate are great too.

I haven't tried red velvet (ick), cheesecake or cookie dough. Nor do I plan to. 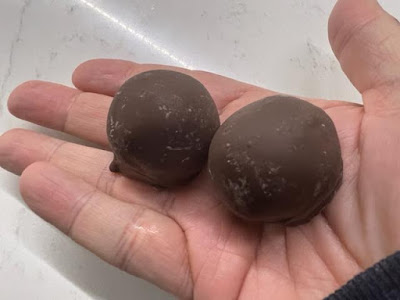 I know they're still sugar, but when I have them, which I can make that small box last weeks at a time, they satisfy my sweet tooth.

Check out your chocolate salty balls!

I had never thought of chocolate (nor cake) being particularly gendered. Straight men are reluctant to buy chocolate because it is girly? I find that hard to swallow (so to speak).