Who Wants to be a Billionaire ? 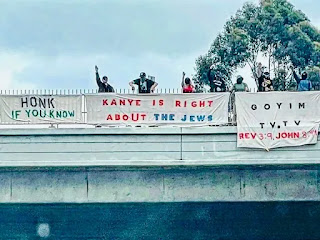 I love that this knob literally lost his billionaire status overnight due to his anti-Semitic remarks.

His management team fired him, as did the Gap and Adidas, though those last two took a little bit of time to pull the trigger - mostly the Gap.

I'm 99.3% sure I've never actually heard a Kanye West song. And I certainly never purchased anything he "designed" for the clothing or shoe manufacturers. I'm not sure who these people are who do.

The fucking GOP must be so torn right now.

West says the right things. Well, right for the GOP and their jew-hatred. And it's done by a very wealthy man - who is black - who wears "White Lives Matter". And he doesn't wear it ironically.  Yet at the heart of it - he is a black man..........and you know...........ick.  That goes against everything they are, though they are branching out a bit with Herschel Walker.

But.........rich and hates Jews and loves whites.  You gotta figure that's gonna win out.  And apparently he and Walker don't mind being the tokens in this group of bigots.

As his money dries up, will they stick around to support him?  I'm sure the PR is already in motion about how horrible all the companies who dropped him actually are. The non-cancelling GOP will start boycotts to cancel.

Good thing he and Kim Kardashiwhore are divorced already, so she'd be having to pay him spousal support / alimony.

Song by: the Thompson Twins

I've not knowingly heard any 'Ye' song either, though I do keep hearing about this loathsome person, so I did feel more than a frisson of satisfaction reading about this Adidas/Gap thing. Poor guy - not! Never mind, it's only karma, even if not quite 'instant'. Ha ha!