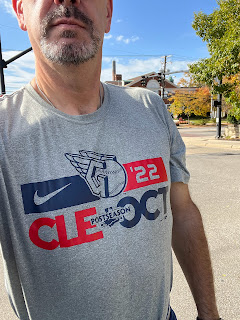 Admittedly, I haven't been following baseball as much this year as in the past.

Perhaps it is the transition from the Indians to the Guardians, and while little has changed but the name and ugly logo, I felt disconnected from it all.

I knew they were in first place in the Central Division. I knew "we" had that sewn well before the end of the season.

....but then it was post-season and I had nothing to wear.

I had not bought one 'Guardian' anything. I felt bad-ish. So off to the team shop I went.

This is a problem for me in many ways. In my pea-brain, I have an idea of what I want and what I think should be there.  This never matches up.

Designs and styles are always wrong - in my honest opinion. But like most of my clothes shopping, it's impulsive and turns out to be wrong.

I actually am ok with the design on this shirt. But lord, it's dated. Already.

Post season was short lived. Yeah yeah, we beat Tampa Bay, which led it to Round Two with the New York Yankees.  But yesterday we lost that series in four games.

So instead of just having a team shirt I can wear anytime over the years, I bought into the generic post-season, which technically could have gone through the World Series.

When I went for my eye operation in July I was wearing a London Marathon 'T' which didn't show a year. One of the assistants asked me if I'd actually run it and when. Being an honest type (hah!) I told him - 1997!

Seems as if baseball should be over.

A piece of history.