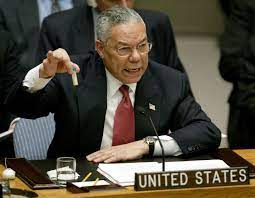 Twice vaccinated Colin Powell died yesterday of Covid-19.
Boo. Hoo,
Sorry.  Boo-fucking-hoo.
My take: two down, like 18 more to go.
Rumsfeld was the first. Now Powell.  C'mon Cheney, Bush, Rice, Scooter and the fucking rest of you. You are all war criminals.
The image you see is Powell knowingly lying to the UN about imaginary weapons of mass destruction in Iraq.
Depending on which new agency or governing body you believe, the Iraq dead (civilian and military) range anywhere from 109,032 to 645,965.
U.S. deaths are at about 4,431 and another 31,994 injured.
.....all for a lie.  Oh, and oil.
Powell claims...well, claimed.....past tense, now, he 'regrets' making a case for the Iraq War. He called it a 'blot' on his record.
Jesus. Fucking. Christ.
Wrecking dad's car when you're underage drinking is a 'blot'. Knowingly leading soldiers - whom you used to be in charge of as Joint Chief of Staff - to their death is more than a fucking 'blot'.  The killing of 110,000 (or more!) is your fucking ticket to Hell.
Powell's faux apologies always rang hollow to me. Of course, he had nothing to fear. There was no tribunal for him or anyone in Shrub's administration. There would be no dishonorable anything. No trial. No jail time. No hanging.  But there should have been.
I don't give half a fuck if Powell tried to peal himself away from his precious GOP that was tainted with BLOTUS. A war criminal trying to cast dispersions at a traitorous president was downright laughable. BLOTUS - I hate to admit - was right to mock Powell for that as well.
Covid killed Powell, the reality was, he was 84. I mean..........tick tick tick......
Now the angel of death can come for the rest of them. I won't feel a thing, though I might dance a bit if Cheney bites it.  IF.  I'm not sure he's human to begin with.  And unlike Powell, I'll have no regrets chuckling over their demise.
btw....the one "good" thing to come out of the Iraq war was this blog. While I didn't hold onto it for a huge length of time, the idea was to use the forum to protest the then soon-to-be start of that war. Ironic I lasted longer than that, but my body count is a LOT less.  It's not zero - just to be clear.
Song by: the Eurythmics
Posted by Blobby at 12:07 AM

Multiple Myeloma, Parkinson’s and Covid. He endorsed Barack Obama for President twice. Dick Cheney a white man has had or stolen how many hearts. And heart operations. This horrific man who along with Karl Rove essentially drove to victory by crushing gay people and gay rights in 2004 . I really don’t give Bush credit for being smart enough to come in from the rain. But yet all day Monday Colin Powell a vaccinated fairly decent human , who believed , his yellow cake bosses and did his.job has taken a beat down while no one else will get this treatment. Wife with Mental health issues I do think that he is culpable , but his own choice and only choice would have been to quit , and some other Slitherin ,would have moved into his position. I don’t feel any desire to beat Down Colin Powell, at least not while Karl Rove and Dick Cheney And George Bush still walk the earth. .