Walk Between the Raindrops 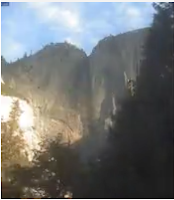 Torrential downpours in California are nice, but not enough, of course.  San Francisco had its wettest October day on record the other day.

That is seemingly very specific, but not to the point if they said the date was a prime number or not.

Souther California is getting it too, but they might have a bigger issue than drought.  Now the issue is mudslides with all the bare hills after fire after fire.

But in Yosemite - and by all means, if you've never been, you should go! - finally has enough rain to have water going over Yosemite Falls. 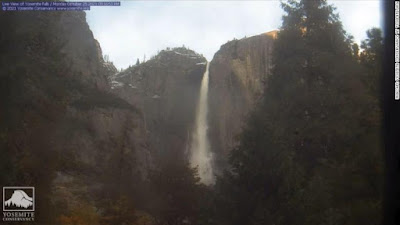 Lack of rain or snowfall has left the falls dry as a bone.
In person, it's something to see. When we were there almost 20 years ago (!) , it was May-ish and the snows higher up were still melting. Some of the roads still impassible due to snow. But due to the melt, all the falls in the park were roaring.
Due to climate change, that has not been the case as of late.
There is already snow in the upper areas, so hopefully they'll get a lot to sustain not just the falls, but all of the areas that are dying for some water.........literally.

Lots of snow at higher elevations in the Sierras, nice wet stick stuff