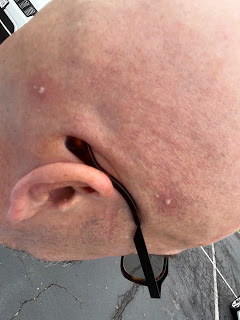 The beauty of aging isn't really beautiful at all.
You know, as you age, things just happen, or pop up. Sometimes the latter needs pharmaceutical help.  Thanks Pfizer!
In reality, other things pop up and a lot of them are dermatological.
There are times when having a full head of hair might be helpful - like when bumps just suddenly appear on your scalp overnight. Literally, not figuratively.
As I couldn't see them and only feel them, I assumed it was a shaving mishap - though I don't remember bleeding. (because I didn't!.).  It felt like a scab of some sort. No pain. No itchiness. Just annoyance. And it is one of those things, once you find you can't stop touching - like after you take viagra. Thanks Pfizer!
I made - yes made! - 710 look at it for me, but he claims it was a raised mole. Two, in fact. This did not make me feel better about it. Moles that weren't there, that is now raised after a day or two?  THAT can't be good!
I have to say, I was incredibly lucky on the dermatology front. They are notorious for taking weeks or months to get into. I got an appointment in two days - thanks lady / guy who cancelled right before I called. Sorry about that melanoma that you didn't make it through. But yay for me.
The appointment with the same doc who opted not to do my plastic surgery. While still a flat affect, he had some human aspects this time and once or twice was quite funny.  He asked about history of skin cancer - I know my dad had some stuff removed, and at least two of my sisters. I couldn't speak to the fact of what it was, as well, my dad is dead and ending up with skin cancer seemed preferable than talking to some of my sisters just to find out what it was.
Short story (too late!), they are not moles and not cancerous. But warts.  .......so...........yay?
Scalp warts?  Is that a thing?
After a bit of discussion and asking if I wanted them removed (uh....yeah!), we went to and through the freezing process. Right before he started, he paused and goes, "no weddings or anything important in the next week?".  Crap.
Then the big spray can of liquid something or other came out. His assertion that it wouldn't hurt was a lie. I mean, it didn't hurt as much as the eight unsuccessful sessions on my thumb 10 years ago, but pain free it was not.
Oh - and I had three, not two.
Allegedly, they'll blister, fall off, scab and those will fall off.  Then I'll be ready for my modeling career to begin.
Song by: Madonna
Posted by Blobby at 12:07 AM

Sounds like liquid nitrogen, if it stops at two , that’s really good. They don’t come back, at least in the same place. Good luck, there is a beginning and an end.

Your own Dr Pimple Popper

I had a flat wart removed from my scalp about three years ago. The doctor comes in with what looked like canned air and said, this may be uncomfortable, but in about ten minutes your skull will hurt for about a half-hour.

And he was right. That freezing stuff was uncomfortable, but by the time I walked out the office door my head was pounding. But it was gone by the time I got home.

All docs is quacks.
You know, as you age, things just happen, or pop up. Sometimes the latter needs pharmaceutical help. Thanks Pfizer! - sounds suggestive.