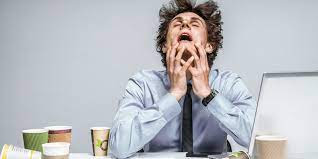 You will find this somewhat unbelievable, but I rarely drink during the week.
This week is not one of those weeks.
It's well known in healthcare that you can tell it's a full moon by the crazy activity that occurs at hospitals. Everything about this week has said every day has been a full moon - which isn't really possible. And it's barely a half-moon anyways.
I rarely discuss work here, and will be vague-ish.  But each day has surpassed the last in terms of craziness and neediness.
There has been an employee who is self-harming, a provider who is just a complete ass to me, short staffing, someone I have to fire - and my favourite:  the person who applied for FMLA two weeks after she quit!!!!
She actually called in her last three days. I'm not sure she even called in to say she wasn't coming. And since she hadn't even worked her first 90 days, she had no PTO to cover this.  Apparently that became a problem for her financially.
T. S.
So, she actually filed paperwork to to get FMLA the last week of her job. What she probably didn't know - or care - is that one is required to use the first six days as PTO before paid FMLA kicks in. But she has none and now no job to accrue said PTO time.
I mean, the claim was IMMEDIATELY declined, but still.
Oh - then her number kept popping up on my phone.  Yeah - I wasn't about to answer that.
Management is exhausting.  222 babies. Some better behaved than others...........but that's all relative.
Song by: Steely Dan
Posted by Blobby at 12:07 AM

What keeps us from saying either "I am too old for this $hit" or "they don't pay me enough for this."

I had an employee write and send a thank you note, Hallmark, to our office saying that she was so happy to have worked there and how kind the Doctors had been to her. Then she quit and two months later , filed for unemployment saying we had made fun of her and discriminated against her. Luckily I kept the card and the claim was denied. Money is an ugly necessary thing, that some people think grows on the trees in their yard only.

I certainly don't envy you your task. It sounds like a constant setting of limits and structure.
I am glad you keep up your sanity through pets and writing.