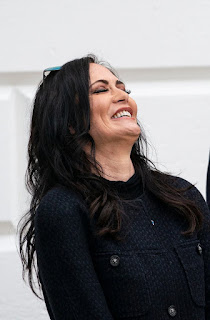 I wouldn't say I got nothin', but I debated whether I should call this my Site of the Month post, but I'm thinking not.

It is a link to Frank Bruni's opinion piece on Alt-Right Whore Spokeswoman, Stephanie Grisham.

Grisham, is on her book publicity jaunt about her time with BLOTUS.  Not unlike me, Bruni doesn't bother using his name either. Nor will he even utter the title of Grisham's book.  ......though, she might be the offspring of Kevin Grisham and his best selling novel, the Rural Juror.

Hell, I like the title of his opinion piece:  Sorry, Stephanie Grisham, You Are Not Redeemed.

Normally, I don't read opinion articles.....or letters to the editor. I used to - until I realized I hate most other people's opinions.

Bruni is right about this book and the ones to come. The half-hearted, faux apology tour.  Little tidbits of the last administration, the dysfunction, but not enough to really piss anyone off - as they might be running again in 18 months and well............a bitch has got to eat, so she gonna need a job.

She is a hypocritical as those she writes about, and while I'd say she probably doesn't think so, I'm guessing she knows so. Yet, there are book sales to be had and what I'm guessing an impending visit to the View, so if you have to half-throw some folks under the bus, so be it.

Props for the "The Rural Juror" by Kevin Grisham mention. Very funny.

I will never read a book written by anyone who stood by and watched this assault on America occur and said nothing because they knew they could write a book after and make some profit off America's misery.

That said, I love the fact that these books piss off Thing 45 and Melanie.

Don’t say the name, I don’t know the name, of her book . John Grisham so aptly put in his place I laughed out loud.