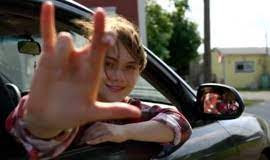 We are a step closer to this made up 2021 goal of 'movie'. To date, we haven't stepped one foot in a theater. Nor do have plans to do such.

Still, our streaming services are helping, though sometimes I think I skirt the idea of what is and isn't a 'movie'.

I saw an ad (on Instagram, maybe?) for Coda, playing on Apple TV+.  It had Marlee Matlin in it, and well, I kind of like her - or at least her character, Joey Lucas, on the West Wing.

What I could pick up from the trailer is that all in the family of four are deaf, save the youngest daughter.

Upon viewing, all of that is true. And of course, the daughter, Ruby, is the bridge between her family and the hearing world. It would be a lot for anyone. Add being in high school - and it pushes the limits.

And add into it, struggling family finances and business, wanting to go to college to SING!

The plot is all very predictable. You've seen it in pieces over multiple movies, and in some cases, all of them in one film:  the unpopular kid / underdog, the person she likes who doesn't know she exists, the "unexpected" pairing of them in a recital, the supportive, but "tough" teacher.........and the parents who need her help to survive the hearing world.

Ok, the hearing part might be the new twist.

That said, it's still well done. I saw some film jury award accolade come up, but I don't know it is THAT well done. But maybe it wasn't a prestigious jury.......or one only for deaf-themed films. It's hard to know without looking it up. Or really caring.

The lead, played by Emilia Jones has a Emma Stone vibe. Matlin is great, and there is a nice and somewhat unexpected scene where she tells her daughter, when born, she hoped she too was deaf.  The brother is semi-hot and well played. The teacher is probably the best of the bunch and the would be boyfriend, I finally figured was the lead in Sing Street.  He does well with an American accent.

Song by: the Chicks

Well you can’t say there is lack of plot. I feel so guilty , and I’m usually a heartless prick. I really dislike Marlee Maitlin and always have. I just have never seen anything she did I liked and she has an Oscar. That is all! Sorry.