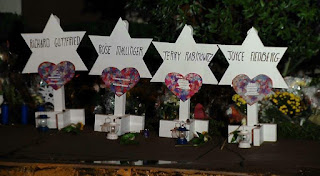 Can someone tell me where the dipshit first daughter (no, not you Tiffany.......not this time) and her creepy automaton Jew of a husband have been holed-up for the last few days?

Let's pretend the pipe bombs to current and previous government leaders didn't happen (or that somehow mid-level 1990s Three Doors Down somehow didn't get dragged(?) into that scenario) or that some white guy shot black folks in a grocery store because he couldn't work a door at black church.

I would say it's harder to ignore 11 killed at temple. I'd say when it is the deadliest attack on Jews in the United States.

It should be said again:  THE deadliest attack on Jews in the U.S.  Ever.

News programs aren't really saying that. Here and there, but they're kind of burying that fact.

The media and the FBI called the mail bombs 'domestic terrorism'.  You can slap that this motherfucker in Pittsburgh too.  It's religious terror too.

The Anti-Defamation League logged a 57 percent rise in anti-Semitic incidents in the United States in 2017, compared to the previous year - and the largest increase since they started tracking 30 year ago.

Pop Quiz, hotshots:   What happened in 2017 that might allow for the meteoric rise in Jew-hating?   It may or may not have happened on or around January 20th.

BLOTUS' comment this not happening if the temple and it's members had just been armed themselves.


As someone on the interwebs said:  if the freedom to practice your religion requires a gun for protection, it's no long freedom of religion.

This rhetoric is nothing new for this shell of a 'man'......or anyone else in the NRA's pocketbook. Yet people buy it hook-line-sinker. Or enough of them do.

710 accurately said the other day - there is disbelief and no longer a call to action. There was plenty for a school in Florida just eight months ago - but where it is the outrage now?  Could it really be because it was Jewish related?  If so, I'm horribly sickened.

So I'll ask again:  where is the faux-Heeb first daughter?  Where is that dweeb-heeb of a son-in-law? They're Jewish when it suits them, but not enough to stand up - publicly - to denounce this behaviour that her father won't. They don't dare not tow the line

No doubt the two of them will tag along on a trip to Pittsburgh - a trip the city and the synagogue don't want to happen - and make a display and mockery of themselves and their faux-caring.

While some Jews do not believe in Hell, Jared better hope one doesn't exist.......because if there is, they got a place waiting for him.  Ivanka too, but in the shiksa section.

javanka HAS been too damn quiet. fuck them.

the rest of us are fired up. I don't want that orange muthafucka in my state, let alone my country!

I've always felt there was a special place in Hell for persons of any maligned group who cross over to the dark side. Gay, Italian, Black, Jewish,etc Republicans. How self loathing can you be? Welcome Jared & Ivanka there's room for you too.

On a side note, did you catch that the memorial stars in the photo you posted are actually repurposed crosses? Very odd, check them out from the back if you get a chance.