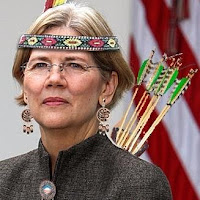 Once upon a time, BLOTUS must have said somewhere, sometime that he called Elizabeth Warren, "Pocahontas" after (or during?) a number of Native Americans visited the White House.

Warren took offense. But she always seems to. Still I get it - if you're not white....and a male, BLOTUS has no respect for you. He doesn't even try to hide it and yet here he is, fat ass still being the Resolute desk.

Allegedly, BLOTUS said he'd donate $1,000,000 to Warren's favourite charity if she could prove any Injun blood ran in her veins.  And she did.


To be fair to BLOTUS - did Warren or anyone think he was going to pay a dime?  The folks who built his "luxury" hotels are suing him for non-payment. People who've worked for him everywhere are still waiting payment.

And to be really fair:  chances are he can't get his hands on a million buck. It'd doubtful he is liquid in any way other than water-weight.

She should sue him for it, I know where she could fine a few hundred thousand lawyers.