A Singer Must Die 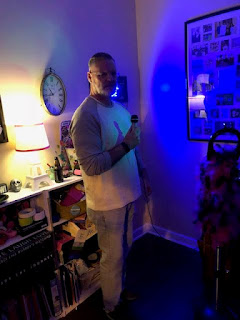 What does one do when out of town on a Saturday night?

Well, it's Halloween weekend (kind of), so you tag-along as a third wheel to a party that is centered around Halloween...and
karaoke.

Yes. You read that correctly.

Longtime friend, Doug, and his relatively new husband, Erik, really wanted to see me yet had plans. Their solution was to have me go. I kind of tried to beg off, but they were hearing none of it - with Doug even driving in rush hour traffic to get me.

It did beat sitting in my hotel room for another night with room service.

The party was costume related.  I went as out of town tag along who didn't know he was coming to a costume party.

Morty, Becky and Dith can attest to the first (and last) time I sang karaoke. I'm thinking 1992. This was not that.

It used to be you did it from a book of pre-selected tunes you'd not normally want to sing....or hear. Now, we have the intertubes with versions of ANY song. Some well done, some not so much.

Doug, seen there, kicked off the festivities with Bauhaus' "Bela Legosi's Dead" .  You don't get that song on most play lists.

Save Doug and Erik, I knew no one, though everyone was super nice. I had nothing to lose by singing.  I started with "Girlfriend in a Coma" by the Smiths. The pseudo host (it's a long story) had never heard it. He said to me afterwards, "there should be a lesson in Ethics with that one".

I joined in on a horrible version of Petty's "American Girl" and Doug and I dueted on Split Enz' "I Got You".  I took solo for "There is a Light that Never Goes Out".  I didn't suck.  There is no video (of which I know), so you can't say otherwise.

It was fun. But more fun hoping in an Uber not worrying about getting to point B.

Now it's time for bed.

I know my limits. Two cocktails and never singing aloud. I inherited my mother's monotone voice. I hit a note if I tried.