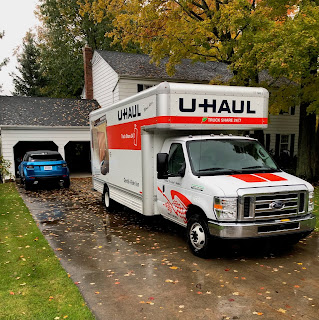 I'm pretty sure that was Dickens' first draft.

It really isn't 'worst', but it is change, and if we have learned anything in life, it is that change is bad.

Monday, my mother moved into independent living. It's a big move for her. A huge one. In many ways.

My mother had been in her current house for 49.5 years. I swear that house behind that truck doesn't look 50 years old to me.

Emotionally I get that it's a difficult situation for her. For me, safety took precedent over sentiment. Let's just say my mother and I did not see eye-to-eye.

As much as I do for my mom, moving her was not one of them. I helped coordinating things remotely from my office, but since I had been out of town and just back to work, I couldn't immediately take off from work, as it was a hastily arranged transition.

That said, two of my sisters and their husbands did the heavy lifting - literally and figuratively.

In bigger news: two of my sisters stayed in proximal distance for 7-8 hours. I'm sure Guinness World Book of Records is looking into this phenomenon as we speak.

On moment's notice, they loaded a truck of some of her furniture and moved it into her new two bedroom one and a half bathroom place. The layout is nothing to write home about, but they made it look it extremely decent. 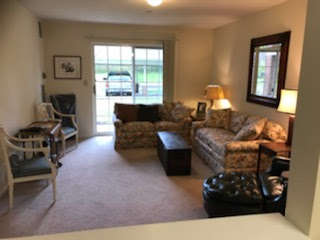 I heard that my mother cried a little when she arrived. I'm sure some were tears of sorrow and frustration, but the verbal was that it "looked like home".

So, now it the settling in period, so I'm expecting highs and lows. That's expected.

I'm hoping the socialization at meal time will help her. She's been alone in that house since my dad died - and the last year, it's been almost around the clock as it has not been easy to get out.  I think this will do her a world of good and someone will be nearby at all times.

It's on to a new chapter. We will see what this brings.

I hope your mom can adjust and make new friends. it's not easy to go from the familiar to the unknown.

My parents are approaching this, too.

I think this will be a good move for your Mum. Fingers crossed she makes new friends and settles in.
JP

I just helped a friend move to independent living about six months ago. She's 91 and has no one. Her only son passed a few years ago. She came out of a 2500 sq ft house. It was hard to make this move. Hard to dispose of 50 years of possessions. I think now there is relief. Life is so much simpler. Hardly anything to worry about. Also important is the social contact that she didn't have before. It's all for the best.

Ah, that time of life. We all know what's next. It makes us sad.