How to be a Millionaire 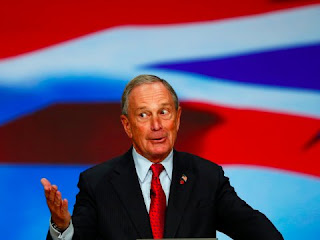 It is in our sights. Well, in theory.

Is Michael Bloomberg the perfect presidential candidate?  No.  But who is?

Bloomberg has re-registered as a Democrat as of yesterday.  Earlier this year he pledged $80 million dollars

Oh - and he also donated $100 MILLION dollars to help flip the House for the Democrats.  Let's hope he can flip the White House too.

In 2000, I "joked" that Gore would never be president because he chose Joe Lieberman, a Jew, for his running mate. America would never allow a Jew to potentially inherit that office, though I "joked" it would ensure that no one would ever assassinate Gore.

Now it's pushing 20 years later, and in this hate-filled climate, Bloomberg's age isn't nearly as limiting as his religion, BLOTUS & Friends have made fucking sure of that. Assassination is on the table here.  .....but in the name of religious freedom, of course.

I like Bloomberg and hoped would have run years ago, but that did not happen - and now look!

I know folks like Elizabeth Warren, but I want one person to tell me why.  Don't give me the bullshit line of her 'tough talk', because as far as I can tell, that's all she has. No action. No winning bills. No turning of tides. She makes video clips of internet shit, but that's it.  Granted, it's more than this current administration has got going for it, but is that what we want?  We already have it.

Other than possibly Warren and Bloomberg - who the fuck are the Dems gonna put up for this race that kicks off in 6 months?

cory booker of NJ is talking about running.

sorry about your baseball team's season end. your team got further than my team.