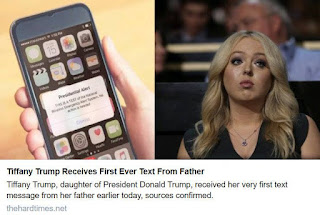 You know, there was a time you couldn't throw a dead cat without hitting Ivanka Blotustein (what? she's "jewish" now!).

Remember on how she touted her father was a champion for women?  Remember how she was booed?

Shall we cut to tape to see her reaction from her father's "rally" in Mississippi?   You know, the one where he mocked a sexual assault victim?

You know, the one where the participants CHEERED???

What might truly baffle me:  how can I be surprised, yet not surprised, all at the same time?

It's making me feel all fucked up inside.


I think part of my thing is - and I've probably said it before, and will at some other time:  this is the point of zero return.  It is possible the lowest of the low.  I don't know how we, as a country, can ever come back from this.

I'll be the first to admit I judge. But normally, I do not hate.  I can no longer say that. I HATE these people. The ones in the administration and the ones who support this administration.  HATE!

And lord - the "ladies" of this administration:  that lying twat, Fuckabee Sanders. I'd ask how she sleeps at night, but I'm assuming it's upside down hanging by her talons. Then there's Conaway, conveniently dropping a tidbit of her being sexually assaulted......right after the hearings.

But to take a play from her bosses handbook, who'd be believe that lying ugly-assed bitch?  {paraphrased, of course}

IF true, why isn't she more outraged at her boss or these proceedings? Unlike Dr. Ford, she is a lying ugly-assed bitch {direct quote.........from me}

And there's Ivanka, the unfriendly zero-personality ghost.   Unlike Fuckabee, Ivanka sleeps on 1600 count Egyptian tread cotton sheets. Since she has no conscience, soul or apparently a voice, she has said nothing - NOTHING - con, or pro, about Dr. Ford.  Let's face it, she's never gonna say anything disparaging about her farther, but how the fuck can you not be embarrassed by his 'talk' the other night?

Do you think she shrugs and in her sit-com catchphrase goes, "that's my dad!"

Of course, the folks of Mississippi laughed. The women are used to sexual assault - mostly from their dads, step-dads, brother, half-brother, step-brothers, cousin-brothers and cousin-fathers.  Please note:  I said 'and' not 'or'.

It seems this entire country is becoming a Mississippi.

smite all the GOPricks! worthless pieces of dogshit!

Makes me want to go out to lunch, and just not come back.

The only one I don't hate is Barron ...but there's time.