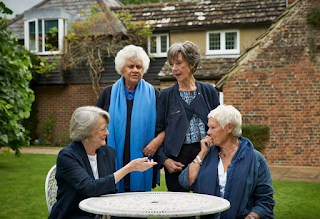 It seemed like it would be fun, if not TOTALLY gay.

There was going to be one showing of Tea with the Dames, and I figured the Gosling / Moon movie will be around a few more weeks, and ugh, I suppose I'll have to do the husband a solid and see the Cooper/Gaga movie (though root canal sounds more fun).

Anyhoo - Dames Judi Dench (she's a national treasure!), Maggie Smith, Joan Plowright and Eileen Atkins allegedly get together a few times per year, and this one time they allowed cameras in.

On paper, it sounds fun. In reality, it had its moments, but it needed to strive for more.

710 has known my friends for decades and still he feels now and again, he's joined a conversation of which he's not apart. This movie was like that to a degree.

There were some questions for them to answer - what did they think of reviews?  how did they meet?  etc.  Dench, by far, was the one most howling with throw her head back laughter.

I know way more about Dench's and Smith's work than the other two. Honestly, except for being married Lawrence Olivier, I'm pretty sure I couldn't tell you a thing about Plowright. And I know Atkins from sight, but save the Crown,  I don't her work. I'd have to IMDB her.

But looking at their work, their paths crossed:  Dench and Smith in Room with a View and the Best Exotic Marigold Hotels. They were with Plowright in Tea with Mussolini.  And Atkins and Smith were in Gosford Park - which lead to Downton Abby.

Smith was hilarious about Downton. She's never seen an episode and while they've sent her a boxed set, she says she hasn't the time to "watch that wretched show".   They also picked on Dench, that she gets all the film offers first -and if they're in any, it's because Dench turned it down.

There were some great laugh-out-loud moments and some introspective ones too. I mean they are all in their 80s and single, some by choice, some by death.

All claim to be surprised at their movie careers and how terrifying it it to be in front of a camera every single day. They just assumed they'd be stage actresses only.

The movie was ok, but not as good as expected. There was far too much of repeating things to Plowright who had a bad hearing aid (and is seemingly blind).

We were by far the youngest in the theater........and the only two gays. Imagine, for Professor McGonagall and M - and only two homos.

Song by: original cast recording from South Pacific
Posted by Blobby at 12:08 AM

I liked this film a great deal - and gave it a high-for-me rating of 7.5 last May.
Judi D. is the only one of the three I've never seen live on stage, and I agree that her and Smith's interjected anecdotes were the best thing about the film.
Joan P. and Eileen A. don't have the international recognition and appeal which the other two possess, largely because they've not been in any mass-appeal films, bur I think they're both truly great dramatic actresses (and I've never seen 'The Crown' - nor 'Dpwnton' for that matter.) Atkins' range, especially, is phenomenal.
When I went, the film being just released, it was a large audience, though I too detected, surprisingly little evidence of a gay element in it.

we had similar at last Saturday's opera - nothing but little old ladies well past 70s.