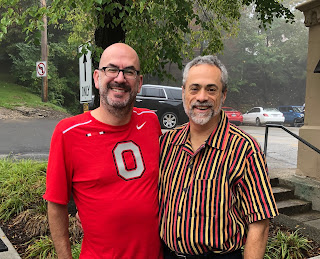 The song title is somewhat indicative of nothing, except for the fact that one Dr. Spo, MD (see Spo, that is a hyperlink!) went to University of Michigan.    .....and I did not.

It's fun to take jabs, hence my Block O shirt.

It has been 7+ year since I first (and last) met the good doctor and Someone. That time it was on their turf.  This time, it was on mine.

Spo and Someone came to Cleveburgh for the Orchestra. It's as good as any reason, considering they are world renowned. The two got to see a number of other things the city has to offer. And they seemed quite pleased with their findings.  The Land isn't what it used to be. There are few jokes to be had anymore - at least that don't date back 49 years.

On their last day, I had the opportunity to meet them for b'fast. I picked a place nice enough, and casual enough, to make it comfortable for all. And it was. There were no awkward moments - at least for me.

Spo did ask to take my picture, and with my permission post it to Facebook. He was looking to stir up some reaction from his brothers and friends about a rival college grudge. I'm a good sport, but for a team that looses so often to THE Ohio State University, with the comments about me, they sure are full of themselves bunch. I did take the mocking well.

We talked a lot about Cleveland and some weird coincidences of some of their other friends, who used to live a few doors down from where 710 and I reside. After that, we barely got to scrape the surface about some of our fellow bloggers and commenters. I'll leave that to your all imagination.

Spo is one of three bloggers I've met more than once.  Birdie (g-d love her!), was the first, and I still miss her so. Mike was the second (though he wasn't blogging by the 2nd time). And of course, Spo.

I was being a good friend, but a bad son, by ignoring my phone while we at and talked. I sent an unknown call directly to voicemail, assuming it was "Rachel, from card services".  A bit later, I noticed a two minute voicemail. "Rachel" doesn't leave those.  Turns out it was my mother - - calling from her room at the hospital.  oy.  Guilt!

Long story short - she's ok, as much as an almost 90 year old can be.  Still we finished up our convo and food and made our way out - me to the hospital, them to the Rock and Roll Hall of Fame. I TOTALLY forgot to tell them about the Browns game that would be going on next door.

Here is hoping we can see each other gain - and maybe not wait another 7.5 years to do so.

"some of our fellow bloggers and commenters" - I wish I had been a fly on the wall to heat THAT!

hope your mom gets better soon.

Fun people in a cool city, lots of fun places and people. Some of the best husbands are from there.

Has it only been twice that we've met? Seems like dozens. When are you coming back to Boston?
- mike

Handsome fellows you two are.