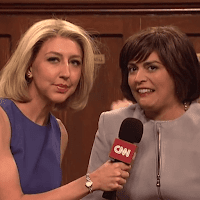 I love how women can be misogynists. Maybe my awe comes that no woman I truly knows is so self-loathing when it comes to other women.  Or themselves.

So, let's try to forget that Susan Collins sold out country, constituents and women for party.

I know.  I know.  There's no forgetting.   Sorry about that.

But now I'm thinking she has no functioning knowledge of how elections go either.  Or is just trying to be a mistress of rhetoric. Either way - it's not playing well with me.

Upon her deciding vote for Rapist Kavanaugh, folks across the country raised something like $3,000,000 for anyone opposing Collins in her 2020 re-election campaign.

Yes, the brains behind the fun raising said prior to the vote that if Collins voted for Rapist Kavanaugh, that they'd throw monetary support behind any candidate who ran against her. Nowhere that I have found, said that they'd fund her campaign if voted against Rapist Kavanaugh.   (I like the name change for "our" newest SC justice.)

So Collins' claims of quid pro quo and "buying votes" is misleading at best and an outright lie at worse, A complete misunderstanding of statements of fact are heinous.

But it's her quote that KILLS me.

"I think that if our politics has come to the point where people are trying to buy votes and buy positions, then we are in a very sad place".

Oh sugar tits (yes, if you can be dismissive of women, I can do the same when directed at you), you do know what at least a good chunk of the Mueller investigation is just about that of which you are so saddened, right?  Yet have done nothing but get on your knees and unzip BLOTUS' pants for him while knowing that he is probably guilty of buying votes and positions.

In her case the vile stench of hypocrisy has wafted its way right across the Atlantic. I never thought that anyone could defy belief by so far!

FUCK THAT BITCHCUNT! she needs to turn in her female card AT ONCE!

"If"??? When I heard her say that quote, my jaw dropped. Has she not heard about the Citizens United decision? And what does she think lobbyists do all the time?