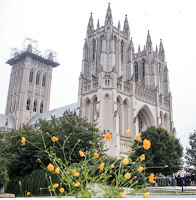 I missed Coming Out Day.

The bigger news than others being queer is the soon-to-be interment of Matthew Shepard.

It never occurred to me that he wasn't resting some place else. But it makes total sense that he is not. The protests around his death and funeral by the likes of Fred Phelps and the Westboro fundies.

It never occurred to me that folks like that would have desecrated his grave.

Now the National Cathedral in DC will hold Matthew's remains. It seems nice. It seems appropriate.

I've been to the cathedral. I didn't know they interred folks there, but apparently Helen Keller and Woodrow Wilson live there now........permanently.

As much as Shepard's death and aftermath were upsetting, I do have to say, I am just drawn to the Laramie Project - the HBO film version. It just amazes me each and every time.

But another video clip kind of cut to the core.......and it's from the West Wing.

While the characters are probably pulled from Shepard's parents - to a very distant degree - the scene, the first time I saw was so unexpected to me. We always pulled for the president and staffers on that show, as they usually did right.

Whether certain aspects of Bartlett were based on Clinton is suspect, but it's tough to deny this one.

and it's a special place for matthew.