the Kids are Alright 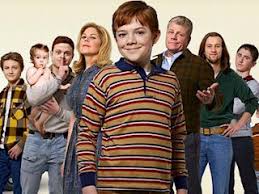 I don't usually promote tv shows.  Oh sure, once in a while I'll write about one here or there, but the chances of my attention span latching on to something is slim to none.

I guess the Kids are Alright latched.

I have zero brothers - and this is a family of all boys. So maybe it is the nostalgia of the '70s, though I don't think that's it at all.

There were previews over the summer and I figured - wrongly - that I'd never bother to watch. But then it was on and even with a remote I was too lazy to turn the channel.  I'm glad I didn't.

There have only been two episodes, but of the eight (?) kids, four are hilarious. Well, 3.5. The main kid, you know is the protagonist so he only gets a half star rating.

If you watched the Real O'Neals a few years back, it's kind of like that, though that main character was gay.  You're just kind of assuming this one is too, but it's the '70s and no one is saying that.  As I IMDB this thing, it made more sense that writers and producers of the Real O'Neals ran this show too.

That's a good thing, since I thought the show never got its due.

The Kids have made both 710 and myself laugh out loud.

The kid in seminary school is kinda cute.
And the star kid is so gay.

I can not remember last when someone said a TV show made them laugh.