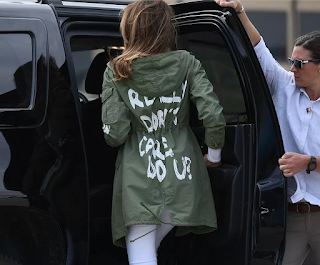 There was a line in the movie the Queen, where Tony Blair asks rhetorically of his staff regarding the royals' behavior:  "won't somebody save these people from themselves.....?"

That's kind of how I feel about the BLOTUS family. All of them. Even that little one, who probably should be separated from his family................by ICE.....or at least Children Services.

In a clan full of absolute morons, it's scary to think, but Melanoma might have been the most sane.

Past tense? Normally I'd say yes, but then I look at the rest of the group and still can't find anyone less moronic.  No worries, she's still in the moron bucket.

I was just about willing to let her stupid fucking ass tweet go during the surge of coverage over separated and imprisoned children.....


.....when she wore the stupidest $29 coat ever produced.....to visit the kiddie koncentration internment camps

But of all the people she was with in DC, the actual trip and then in Texas, did not one person stop to think and say - "W.T.F., Melanoma?"

Well, I think that answer is obvious.


I will give the entire gang this:  each time they hit a new low and I think they can't surpass it - they do.

Good thing they're not alcoholics - they might never hit rock bottom.

In the relentlessly crazy world of current White House shenanigans, the choice of THIS message above all on the coat must count as one of the most bizarre - and offensive - one can imagine. However, as you say, the T family can be counted on for sure to outdo even this one.

What AM said.
She knew what she was doing and now we all know that she doesn't fall far from the _____.
Fuck.Her.

Some people wear their heart on their sleeve, she wore her indifference on her back. Visiting those little Trump-boarder-hotels.

The adjective Inappropriate comes to mind.
So does heartless, callous, mean.

It is almost at morbid game - what is next in the how can they go lower?
Alas it keeps getting worse - and nothing seems to stop them.